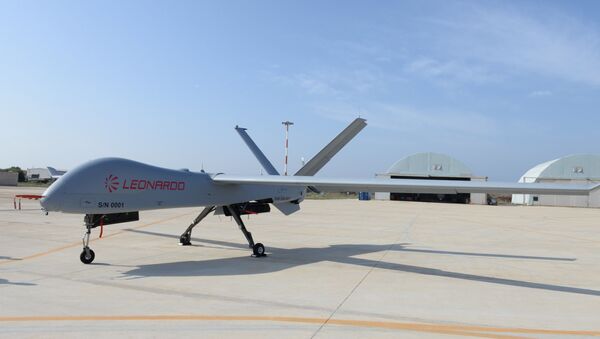 Leonardo announced Friday that its Falco Xplorer S/N0001 had successfully landed back at Trapani Air Force base on January 15 following a 60-minute flight over the Gulf of Trapani.

The drone, unveiled to the public at the Paris Air Show last year, is the third variation in the Falco family and is designed to provide multi-sensor surveillance support to military and civil customers to assist in “governmental missions such as border patrolling, coastal watch, illegal immigration prevention, law enforcement, critical infrastructures surveillance” and more, Leonardo noted in its brochure for the Falco Xplorer.

According to the defense company, the drone will now be put to the test in a series of flight campaigns to gauge the performability of its “state of the art” Remotely-Piloted Air System’s (RPAS) purported 24-hour endurance, payload threshold of up to 350 kilograms and maximum takeoff weight of around 1,180 kilograms.

“These campaigns will also certify the Falco Xplorer against NATO’s airworthiness STANAG 4671, dramatically expanding the territory over which it can operate,” Leonardo said in its January 17 release, referring to a NATO Standardized Agreement on unmanned aerial vehicles.

The aircraft is also capable of being equipped with a hyperspectral sensor, which allows the Falco Xplorer to monitor matters related to agricultural development and pollution.

Previous Falco models, including the Falco and Falco EVO - which boasts an endurance of over 20 hours and has a maximum payload of around 100 kilograms - have been used by the United Nations and Frontex, the European border and coast guard agency.

According to a July 2019 press release from Leonardo, the Falco EVO assisted in an operation which identified the transfer of some 81 “illegal migrants” from a mothership to a smaller boat in the Mediterranean Sea on June 20, 2019. The Falco EVO, along with other assets of the Frontex Maritime Aerial Surveillance project, kept watch over the vessel until it was ultimately seized by Italian authorities.

Leonardo highlighted that its latest Falco model is not subject to restrictions related to the International Traffic in Arms Regulations, meets Missile Technology Control Regime (MTCR) class II requirements and is therefore “readily exportable around the world.”