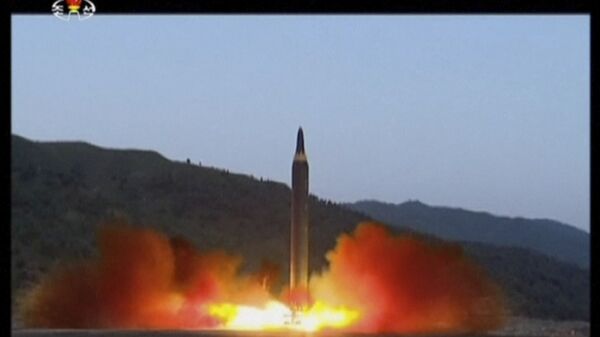 © AP Photo / KRT screenshot
Subscribe
International
India
Africa
During a recent speech at a prominent US foreign policy think tank, a leading US general noted that the US military could learn a thing or two from the Democratic People’s Republic of Korea (DPRK), which has been able to rapidly advance its weapons programs in spite of sanctions and poverty.

What do Kim Jong Un and Elon Musk have in common? According to the Pentagon’s number 2 general, it's relentless drive to succeed in spite of failures - something Washington could learn from.

“Somehow over the last few years, North Korea has developed a ballistic missile program that can threaten its neighbors and threaten the United States, and a nuclear program that can threaten its neighbors and the United States, and they've done that,” Joint Chiefs Vice Chairman and US Air Force Gen. John Hyten said at a Friday conference hosted by the Center for Strategic and International Studies (CSIS) think tank. “They've changed the entire structure of the world - with the 115th most powerful economy in the world.”

“You want to know what's different about North Korea? They learned how to go fast,” Hyten said.

The US Armed Forces’ second-highest ranking officer noted that by comparison, the US military is failure averse, afraid to learn from mistakes.

However, Hyten noted there are some Americans who could point the way, such as Elon Musk and Jeff Bezos.

"If you want to go fast in the missile business you need to test fast, fly fast and learn fast. Look at SpaceX in this country. There were some pretty spectacular failures. Did they stop? No," Hyten said of Musk’s burgeoning space company, which has pioneered a slew of new rockets since its founding in 2002.

Some of its recent inventions are a system for recycling rocket stages, including a specialized water vessel with a huge net to catch discarded pieces as they are shed during a launch, and a rocket that can land on a launch pad.

The US general noted a similar culture of falling forward has been behind Silicon Valley’s continued success, but that similar efforts to develop new software by defense contractors are “just a nightmare.”

“If you look at every one of our programs, it's a nightmare across the board,” he opined.

However, Pyongyang’s nuclear and ballistic missile programs still took decades to come to fruition. The DPRK’s Yongbyon Nuclear Scientific Research Center opened as early as 1962, and an adjacent yellowcake facility began processing uranium for refinement in 1980. Despite the loss of its primary ally, the Soviet Union, and the imposition of crushing sanctions amid unprecedented natural disaster, by 2006 the socialist nation was still able to test its first nuclear device. Ten years later, it tested a thermonuclear device.

Likewise, the DPRK’s ballistic missile program, building off of Soviet SS-1 (NATO reporting name “Scud”) medium-range ballistic missiles, fired off its first home-grown, space-capable rocket in 1998 and in November 2017 tested a Hwasong-15 interncontinental ballistic missile with a purported range of 8,000 miles. Since then, it has tested short-range weapons believed to be rocket artillery similar to the US’ HIMARS system.