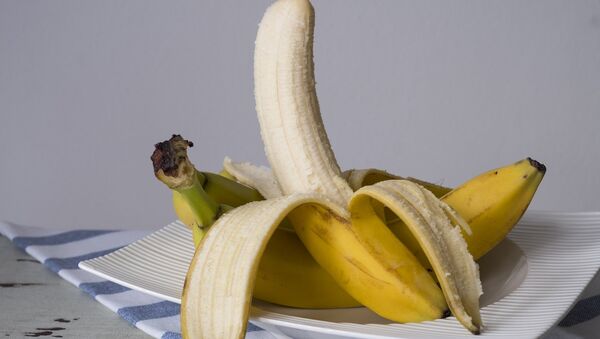 A seemingly innocuous clip of French tennis player Elliot Benchetrit on Saturday went viral as he was handed a banana by a ball girl when taking a break during his Australian Open qualifying match.

French tennis player Elliot Benchetrit had a red-faced moment on court at the Australian Open on Saturday, as he got told off by the umpire for asking a ball girl to peel a banana for him.

So this is the moment where Elliot Benchetrit asks the ballkid to peel his banana. I’m glad the umpire (John Blom) stepped in and told him off. pic.twitter.com/TK1GET68pG

​The world number 231 was taking a break during his qualifying match against Dmitry Popko when he was handed a banana by the ball kid.

The 21-year-old then requested the girl to peel the fruit for him.

The ball girl cast a confused glance up at umpire John Blom, who proceeded to tell the French player off.

She handed the piece of fruit back to the player as he looked at her, then the banana, in disbelief before he used his teeth to bite the top of the banana off then peeled it.

The clip, which went viral the moment it was posted on the internet, showed Benchetrit seeming to argue with the umpire and become visibly annoyed. The player then got up and proceeded with the match, which he won, qualifying for the first round of the Australian Open.

Benchetrit later blamed social media for posting the 10-seconds long clip that was taken out of context and did not show the whole situation.
However, a longer video posted soon after seemed to confirm the previous impression.

So Benchetrit wrote on Twitter that #Bananagate is only a 10-second video and that it doesn’t show the whole situation.

Well, below is the entire sequence (33 sec) which shows exactly what happened. The blaming-social-media-card is not gonna work... https://t.co/RGmIJYz2cE

​Tennis legend Martina Navratilova also retweeted the video with the caption:
"What's next grapes? #entitlement. John did the right thing, that's for sure."

What’s next- grapes?😱#entitlement
John did the right thing, that’s for sure https://t.co/VuViqZLdrA

​Fans went online to comment on the “fruity” incident, with many slamming some players for treating ball kids “like slaves”.

Gosh I hope his wittle fingews feel aw bettew now! Poor lil guy needed some help with his banana before he went out and played more tennis and now he is being bullied 😖

Well that just takes the “banana”isn’t it time the PTA and WTA told all players to stop treating ball kids like their personal run arounds and get their own towels drinks AND Bananas????

Agree. Only prob w towel is that it takes up extra time which slows the match down. If it's occasional no biggie. But there are some players that sweat so much they need the towel constantly. As a viewer it would just be really annoying. But. Ball kids aren't servants

Players treat ball kids like personal slaves.
The way they have to run around and grab their sweaty towels and hand it to them, then run and put it back for them.
Get your own damn towels tennis players #AusOpen2020 #AusOpen 🎾

Too right. She's not a servant. She's there to do a job. He looked shocked when he was told to do it himself. Whattttt, peel it myself?!

@elbenchetrit humbleness is a prerequisite for an elite athlete

Aw man. @elbenchetrit will now forever be known as the Banana Brat.

​Other netizens disagreed, though, and offered their reasoning.

Gee. I guess we can’t ask anyone for help with anything???

Yes because getting banana all over his hands is sure going to help his grip.

Well, if this is everything, then I am not impressed. Ballboys and ballgirls volunteer for this service and they and their families receive good benefits. You--you are just generating clickbait with your silly outrage.