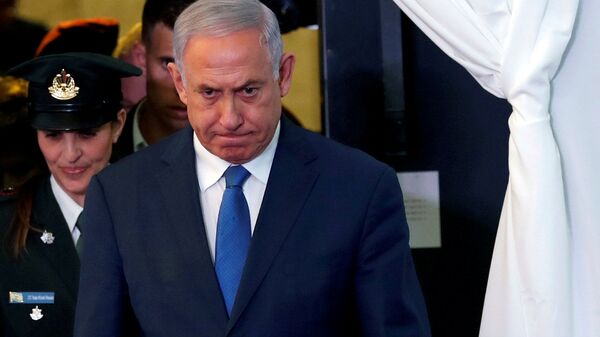 Ilya Tsukanov
All materialsWrite to the author
Israel’s prime minister and other officials have repeatedly likened the Islamic Republic of Iran to Nazi Germany in recent years, and successfully lobbied President Trump to pull the US out of the 2015 Iranian nuclear deal, which Tel Aviv has dubbed as ‘appeasement’.

“Iran is openly declaring every day that it wants to wipe Israel off the face of the Earth – and, by the way, Israel today has a population of more than six million Jews,” Netanyahu said, speaking to the US-based Christian broadcaster Trinity Broadcasting Network in an interview expected to air later Tuesday.

According to Netanyahu, “the lessons of Auschwitz are: First, stop bad things when they’re small – and Iran is a very bad thing. It’s not that small, but it could get a lot bigger with nuclear weapons, and I think the first thing is to stop that. And second is to understand that the Jews will never, ever again be defenceless in the face of those who want to destroy them.”

Israel is set to host the Fifth World Holocaust Forum in Jerusalem on Wednesday to mark the 75th anniversary of the liberation of the Auschwitz concentration camp in January 1945, with a number of world leaders including Russian President Vladimir Putin, French President Emmanuel Macron, Prince Charles, German President Frank-Walter Steinmeier and Israeli President Reuven Rivlin expected to address the gathering, and dozens more expected to attend.

Israeli officials have repeatedly compared Iran’s nuclear activities to Nazi aggression, accusing Europe of “appeasing” the Islamic Republic much like Adolf Hitler was appeased ahead of World War II, and comparing Tehran’s nuclear enrichment activities to the Nazis’ march into the Rhineland in 1936.

Tel Aviv has repeatedly expressed concerns about Iran’s alleged pursuit of nuclear weapons. Tehran has long maintained that it has no intention of pursuing nuclear weapons, saying weapons of mass destruction run counter to the country’s Islamic faith. Israel, meanwhile, is the only state in the Middle East believed to possess nuclear weapons, but has a deliberate policy of ambiguity regarding its status as a nuclear power. It is also the only country in the Middle East to have occupied, formally annexed, and colonised foreign territory since the Gulf War, but has recently received partial reprieve for this activity from US President Donald Trump, despite condemnation by the United Nations General Assembly.