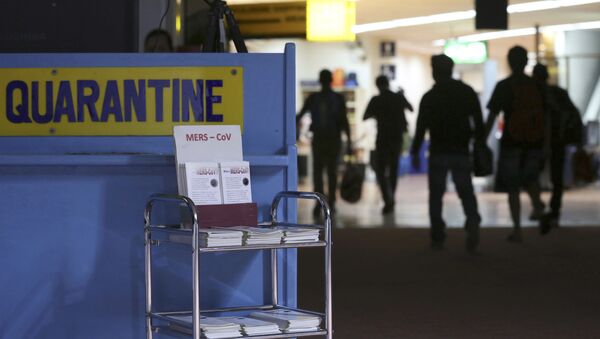 © AP Photo / Aaron Favila
Subscribe
New Delhi (Sputnik): The 'mysterious' virus outbreak has infected between 62 and 200 Chinese and claimed the lives of three persons so far. All cases were reported in China’s Wuhan province. Health officials have expressed concern about its possible spread across the globe.

India and Bangladesh on Tuesday issued precautionary health guidelines to their citizens and travel-related advisories to people travelling to or from China with regard to the 2019-novel coronavirus (2019-nCoV).

It’s a new variant of coronavirus that has created a global scare. It is also the first time the virus has been reported to have infected humans.

In India, the Ministry of Health and Family Welfare has sought details from the Ministry of External Affairs (MEA) on people who have applied for an Indian visa from China since 31 December so that they can be counselled, the health ministry said in a statement.

The ministry said that MEA has been also asked to issue travel advisories to the Indian Embassy and consulates in China and in countries adjoining Beijing in local languages and passenger information about the infection’s outbreak.

Hospitals have been instructed to isolate patients with severe respiratory illness and ensure ventilator management of serious cases.

International airports in Delhi, Mumbai, Kolkata, Chennai, Bengaluru, Hyderabad, and Cochin and airlines have been instructed to undertake thermal screening of passengers and to follow International Civil Aviation Organisation (ICAO) guidelines for reporting the illness on flights originating from China.

Isolation and critical care facilities have also been set up at airports to deal with virus-linked emergencies, the health ministry statement said.

In neighbouring Bangladesh, authorities at the Hazrat Shahjalal International Airport in Dhaka have announced that all passengers who have travelled to China and back in the last fortnight or those having flu-like symptoms will be screened from Tuesday.

The Institute of Epidemiology, Disease Control and Research (IEDCR) will be called in to test any passenger detected with the virus, or having flu-like symptoms, Bangladesh English daily The Daily Star quoted airport officials as saying.

“We have briefed physicians working at the airport for detection of probable cases. They would work as per procedure,” the daily quoted IEDCR senior scientific officer Dr. Alamgir Hossain as saying.

Health officials around the world suspect that the new coronavirus strain could have a connection to the Severe Acute Respiratory Syndrome (SARS), which killed nearly 650 people in China and Hong Kong in 2002-2003.