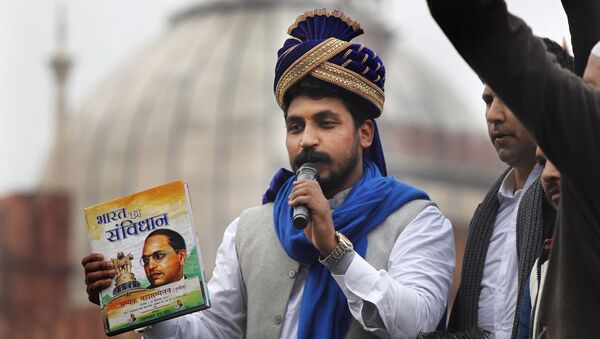 New Delhi (Sputnik): The leader of a Dalit (underprivileged caste) political group, the Bhim Army was arrested while protesting against the new citizenship law outside the Jama Masjid Mosque in the old part of Delhi on 20 December. A local court on 15 January granted him bail with the condition that he will have to stay away from Delhi for a month.

Judge Kamini Lau at Tis Hazari Court in Delhi on Tuesday decided to amend the bail conditions of Bhim Army chief Chandra Shekhar Azad. During the hearing of Azad's plea to modify his bail condition, to not visit Delhi and stay at his residence at Saharanpur, Uttar Pradesh, the judge said:

"The court directs Azad to provide a schedule of his visit to the deputy commissioner of police concerned whenever he visits Delhi for medical treatment or for the purpose of elections. In case Azad is not in Delhi, he shall indicate his presence before the DCP concerned through email."

The court has also asked him to stay at the address mentioned in the application whenever he visits Delhi.

The court noted that most of the offences in the police report against the Bhim Army Chief are bailable and there isn't any real evidence that he had engaged in non-bailable offences. The assistant commissioner of police's statement was recorded as saying that no cogent material is available at this moment against Azad and the investigation is ongoing.

While granting bail to Azad on 15 January, Judge Kamini Lau had directed Azad to stay at his permanent residence in Saharanpur, Uttar Pradesh, and indicate his presence before the station house officer concerned every Saturday.

Azad and his supporters were protesting against the controversial 2019 Citizenship Amendment Act, 2019, enacted by the Indian federal government in early December. The law seeks to provide citizenship to persecuted Hindus, Sikhs, Christians, Parsis and Buddhists, while excluding Muslims from three neighbouring Islamic countries: Afghanistan, Bangladesh and Pakistan.

Azad is a lawyer and the co-founder and president of the political group Bhim Army. Operating as an organisation working for the emancipation and the rights of Dalits, Azad's Bhim Army is also set to enter electoral politics.

In December, Azad had said he would formally announce the name of the party, which would work for the welfare of the poor and untouchables.