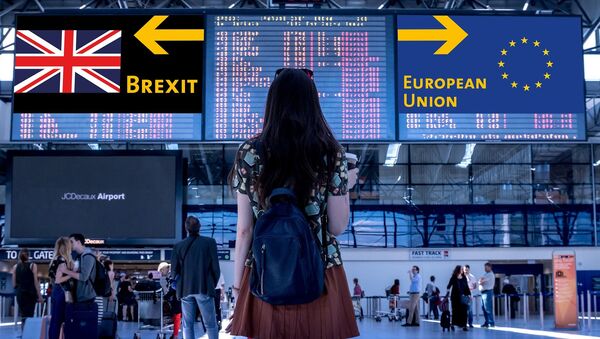 Oleg Burunov
All materialsWrite to the author
US President Donald Trump said that Washington and London are working on a “very substantial” bilateral free trade agreement which could be signed right after the UK leaves the EU.

In an address to a Geneva business conference on Monday 20 January, former British Trade Secretary Liam Fox is expected to focus on Prime Minister Boris Johnson’s efforts to sign a post-Brexit free trade agreement (FTA) with the US, The Guardian reports.

Fox will say that for this purpose, Johnson should negotiate trade deals with individual US states, such as California, Texas, Florida and New York, as a backstop.

He will argue that these four states could become G20 members if they were independent nations, and that the UK could capitalise on clinching a spate of deals with the states pertaining to services, which account for about 60 percent of Britain’s exports to the US.

Fox will also assert that a full-fledged UK-US free trade agreement may encounter “unavoidable difficulties” because “the US will, quite correctly, negotiate hard for its own interests” and “is likely to focus on better access for its agricultural products”.

In this vein, he will insist that such a deal is “the only mechanism” to add to developing business ties between the US and the UK, something that he underscored in an interview with The Guardian late last week.

“There are other things in the toolkit apart from FTAs. We should be concentrating on market access restrictions rather than solely FTAs with countries like America,” Fox underscored.

Last summer, US President Donald Trump stated that he discussed the FTA issue during his first call to congratulate Boris Johnson, who was elected the Conservative Party leader and the Prime Minister of the UK at the time.

“We’re working already on a trade agreement. And I think it’ll be a very substantial trade agreement, you know we can do with the UK, we can do three to four times, we were actually impeded by their relationship with the European Union,” Trump pointed out.

As far as the EU is concerned, Johnson for his part said earlier this month that he was looking forward to concluding a FTA with the bloc and that he was ready to start the negotiations as soon as the UK withdraws from the EU in late January.

European Commission President Ursula von der Leyen, in turn, said that the EU and the UK may start talks on their post-Brexit trade ties as early as next month.

Britain will also decide whether to extend the trade talks past 31 December of this year. It will take the EU about two months to ratify the pact, according to von der Leyen.