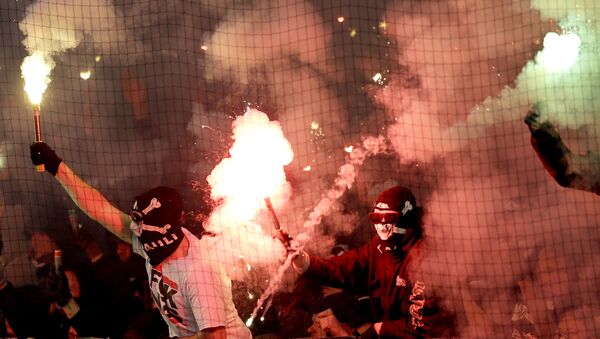 St Pauli and their supporters are known for left-leaning views. In October of 2019, the club fired a Turkish defender who had expressed support for Ankara’s military campaign against the Kurds in Syria in a Twitter post, citing the player’s disregard for the club’s values and the need for his protection as the main reasons for the decision.

UK counter-terrorism police have added the badge of a German football club to its list of organisations that represent a possible terror threat, that’s according to The Guardian. The guideline has been sent to school teachers and medical staff as part of anti-extremism briefings. The symbol, which often appears on flags at games, features a white skull and crossbones on a black background. It appeared alongside organisations that use the swastika as its symbol, or jihadist groups.

This is insane. German second division football club St Pauli - who strongly identify as anti-fascist - are included on a UK counter-terrorism police document sent to teachers, NHS staff and other public sector workers. No other sporting group is listed. pic.twitter.com/SiprgzvWcn

​St Pauli, which play in the second division, are known for their left leaning and anti-fascist views. The club’s supporters actively opposed Turkey’s campaign against Kurds, held banners welcoming migrants during the European refugee crisis, and are often involved in confrontations with neo-Nazis.

Commenting on the news, the club’s defender James Lawrence said he was "proud" of what the club stood for. "Proud of the values we have. Proud to play for St. Pauli. Anti-Fascist, Anti-Racist, Anti-Sexist and Anti-Homophobic. What's not to like!" the footballer said.

The anti-terrorist guide also featured groups regarded as a potential concern, including such non-violent organisations as PETA and Greenpeace - which is supported by actresses Judi Dench, Gillian Anderson, as well as writer and actor Stephen Fry, along with Stop the Badger Cull, which is supported by Queen guitarist Brian May.