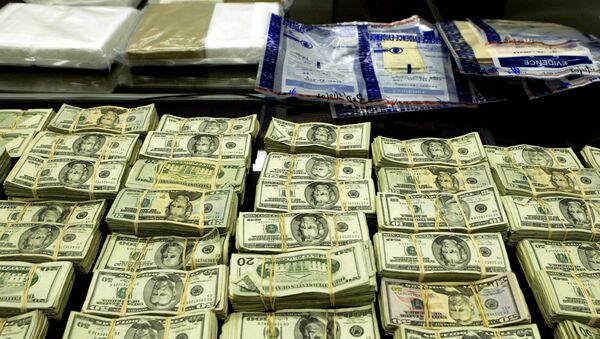 Just months after Mexico’s infamous drug lord Joaquin “El Chapo” Guzman, who was once included in the Forbes list of richest people, was sentenced to life in prison, his family has created a company that now sells merchandise featuring the criminal’s image and name.

Mexican journalists have said that the impunity of drug cartels contributes to the glorification of crime, as the country’s most prestigious Intermoda fair featured beer named after El Chapo, the former leader of the largest cartel in the world. "Since cartel members rarely see legal punishment [in Mexico], they become a sort of role models for thousands of people that feel betrayed government", Sandra Rodríguez Nieto, a reporter at the local newspaper El Diario, told The Guardian.

The beer named after the infamous drug lord is part of the brand "El Chapo 701" led by the criminal’s wife, Emma Coronel. The company produces different types of merchandise, ranging from baseball caps and denim jackets, to mugs and flasks. It is now awaiting government approval to start selling the El Chapo lager. The price point for a 12-ounce bottle is $3.75.

Journalist Anabel Hernández said El Chapo’s family could make money on his name due to cartels’ immunity and stressed that she has documents proving that the government has contracts with companies owned by the leader of the Sinaloa cartel.

"The cynicism with which his family conducts its business is because they are immune, and because there are people who are willing to buy these products that make an apology for crime. Even companies controlled by Zambada, [the current] leader of the Sinaloa cartel, have contracts – now, at this moment – with the Mexican government. I have the documents. So of course this Chapo cerveza can exist in Mexico", Hernández said.

The Sinaloa cartel is regarded as one of the most dangerous and largest in the world. Mexican authorities recently suffered a humiliating defeat at the hands Sinaloa, which turned the city of Culiacán into a war zone after Mexican police detained El Chapo’s son. Guzman himself has twice escaped from maximum security prisons, before finally being arrested in 2016 and subsequently extradited to the United States. The former head of the deadly Sinaloa cartel was found guilty on all charges and sentenced to life in jail. He is serving time in the most secure supermax prison.