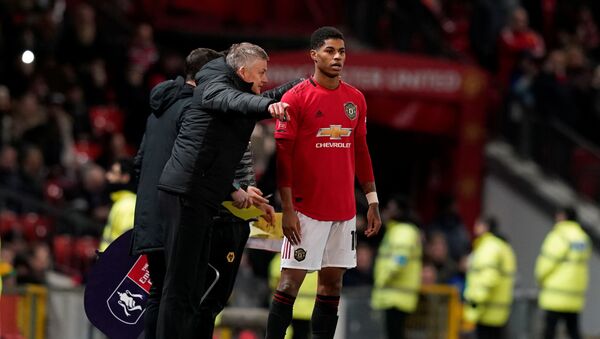 The UK football club player was injured during Manchester United's 1-0 victory against the Wolverhampton Wanderers at Old Trafford Stadium on 15 January, in the third round of the domestic FA Cup.

The manager of Manchester United, Ole Gunnar Solskjaer, confirmed on Sunday that striker Marcus Rashford is facing a lengthy stay off the field, saying that the player suffered a stress fracture during Wednesday’s match against the Wolverhampton Wanderers.

"He’s suffered a bad injury. Yeah it’s a stress fracture, it happened against Wolves. It’s not happened before, it happened there and then. He’ll be out for a while. He won’t be back until after the mid-season break. Normally six weeks to heal, but I’m not a doctor, and then he needs rehab after that probably," Solskjaer told Sky Sports.

Never want to feel like I’ve let my teammates, the club and most importantly the fans down so did my very best to carry on tonight and was gutted to come off.

Top work from the lads to get into the next round 👊🏿 pic.twitter.com/ZLpxiqhtq3

Regarding the team’s plans to cover Rashford's absence, Solskjaer did not commit to a replacement, noting instead that Man United will “have to look at it closely” to handle the set-back.

"We might look at some short-term deals. We are looking at numbers," the manager added.