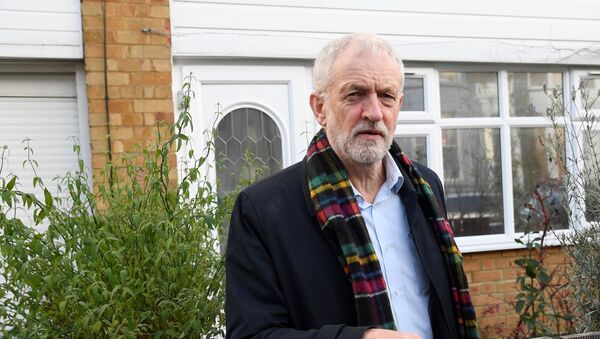 Lilia Dergacheva
All materialsWrite to the author
A new controversy has popped up around the resigned Labour leader, with many believing that there are sufficient reasons for accusing him of double standards, even assuming that he has been “trolling” his opponent Boris Johnson and the Tories.

Outgoing Labour leader Jeremy Corbyn has been called out by many, as The Sunday Times reported he is set to elevate former Commons Speaker John Bercow, as well as his right-hand man Tom Watson and another senior Labour figure, Karie Murphy, to the House of Lords.

Sources in the party did not deny the claim, but have so far declined to comment on The Times' report.

Corbyn instantly faced accusations of hypocrisy for nominating his allies for the top peerage roles, given that he had earlier been critical of the “establishment” as well as David Cameron and Theresa May’s practice of doing so when they quit their posts.

Jeremy Corbyn putting Bercow in the Lord's shows what a nasty, petty, vindictive, hypocritical turd he was.

@RLong_Bailey says she supports the abolishing of the House of Lords, whilst her Leader @jeremycorbyn nominates a known Bully, in John Bercow, becoming a member of said institution. Absolute Hypocrisy. https://t.co/Jv8ER4ag3j

“And Labour wonder why people think them odd", one weighed in, while another came up with an even more descriptive – although strong-worded – account:

In nominating Bercow for a peerage, Jeremy Corbyn has climbed onto the dining table of 17.4m people, dropped his trousers & filthy underpants, squatted over their plate, grunted, & laid a massive, steaming, curled turd of contemptuous, anti-democratic, insult on their dinner.

Many have outright called for the abolition of the “unelected House of Lords”, while some rushed to share their “disgust":

It’s not cool when ‘our’ side appoint advisors and former power brokers either. It’s undemocratic stinks of corruption.

Quite a few, meanwhile, rose in Bercow’s defence, singling him out as a speaker:

Always hoped he would. Bercow a good speaker, fair on the whole (which angered Tories) and only doing what convention dictated. Delighted to annoy Tories even more (& payback for J Mann!)

I think it’s a great decision ... Mr B was an excellent speaker

…while some suggested it was “quite a nice troll of Johnson and the Tories:”

Well it's quite a nice troll of Johnson and the Tories.

The Tories should have.
Very pleased, he deserved it for standing up for Parliament imo.
(Tin hat on)

It's a brilliant way to stick it to Johnson - although I think that while our second chamber is still unelected, our peerages should be picked by the membership to at least give a little bit of democracy to this sham.

It is unclear whether Bercow would sit as a Labour peer or a crossbencher, as he first entered Parliament as a Tory MP and was even a member of the so-called Monday Club, which called for the “repatriation” of immigrants.

Separately, Corbyn has been criticised for the inclusion of his former chief of staff, Karie Murphy, to the eight-strong list of potential peers, amid a proceeding inquiry into how Labour dealt with allegations of anti-Semitism within the party. For instance, the Jewish Labour Movement referred to Karie Murphy’s nomination as “deeply inappropriate”, calling to “rescind it immediately”.

The politicians’ prospective nomination could still be vetoed, as the House of Lords Appointments Commission is supposed to weigh and vet all nominees.

After its overwhelming defeat in the 12 December vote, Labour is now fully engaged in a leadership race, which will determine who Corbyn will pass on the baton to, and thereby the direction that the party will go post-Brexit.