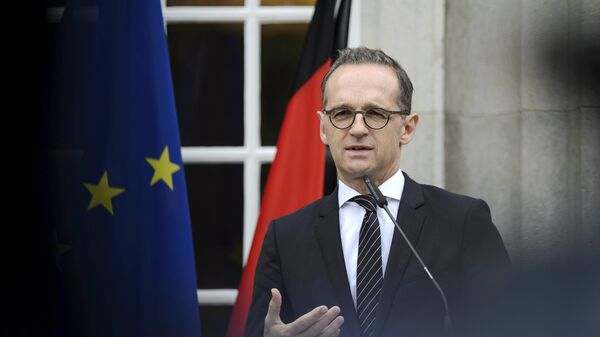 © AP Photo / Sina Schuldt
Subscribe
International
India
Africa
Polina Strelnikova
All materials
Tensions between Tehran and Washington, which have been growing since Donald Trump’s withdrawal from the Iran nuclear deal, peaked this January following the killing of the Islamic Republic’s top commander Qasem Soleimani. Following the assassination, Germany and other European countries reiterated their calls for avoiding escalation.

Germany’s Foreign Minister Heiko Maas has lambasted the US over its policy of maximum pressure on Iran, warning of a flare-up in the region and called for diplomatic solutions with Tehran. As the chief diplomat told the German outlet Bild am Sonntag, "threats and military actions have not changed anything" when it comes to the stance of the Iranian leadership.

"We should not pretend that the situation will automatically improve with a regime change in Tehran by outside forces. This approach has already failed, for example, in Iraq", he said.

He also noted that if one wanted to improve the situation for the Iranians, there was no point in ending the dialogue.

"Then, we should talk to Iran and demand compliance with human rights. In any case, solely threats and military escalation have brought nothing. We want to prevent a flare-up in the Middle East", he urged.

Maas called on Germany’s allies to take the European approach to the crisis, namely the EU’s reliance on diplomacy instead of escalation, and defended the 2015 Iran nuclear deal.

"Without the agreement, Iran would probably already have an atomic bomb. We absolutely must prevent it from getting this far", he warned.

At the same time, Maas urged Tehran to abide immediately by the obligations under the Joint Comprehensive Plan of Action, although it scrapped its remaining limitations under it in the wake of the deadly attack on Iranian top commander Qasem Soleimani.

"The increased uranium enrichment must come to an end. The International Atomic Energy Agency must continue to have access to all facilities in Iran to check this closely", Maas concluded.

Road to Escalation in Middle East

On 14 January, the foreign ministers of the UK, France, and Germany – countries-signatories to the Iran nuclear deal – announced that they "have no choice" but to take action through the Dispute Resolution Mechanism (DRM) of the 2015 JCPOA to bring Iran back into full compliance with the accord. They later confirmed that they had initiated the dispute mechanism, which could see the sanctions against Iran reinstated.

‘Sigh of Relief’: By Averting US Deaths, Iran Strike Dodged ‘Major Conflict’ Escalation
Tehran has been gradually reducing its commitments under the JCPOA since May 2019, following Washington's unilateral pull-out of the treaty one year earlier and the imposition of energy and banking sanctions on the state in 2018, but the Islamic Republic announced that it was giving up the remaining restrictions amid a fresh flare-up this January. Relations between the two countries went further downhill following an attack on the US Embassy in Baghdad, with Washington blaming Tehran for orchestrating it. The US responded with a drone attack on top Iranian military commander Qasem Soleimani, who had travelled to Iraq.
Newsfeed
0
Access to the chat has been blocked for violating the rules . You will be able to participate again through:∞. If you do not agree with the blocking, please use the feedback form
The discussion is closed. You can participate in the discussion within 24 hours after the publication of the article.
To participate in the discussion
log in or register
loader
Chats
Заголовок открываемого материала