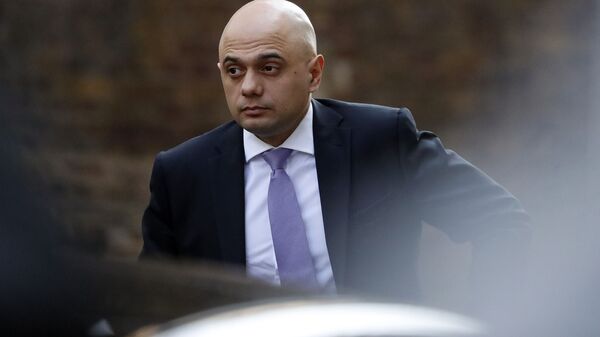 Aleksandra Serebriakova
Moscow-based Sputnik correspondent specializing in foreign affairs.
All materialsWrite to the author
Great Britain is currently trying to finalise its divorce from the European Union and leave the bloc on 31 January, after three years of heated debates. The country is still set, however, to continue trade negotiations with the remaining EU states for the next 11 months.

UK Chancellor of the Exchequer Sajid Javid has warned national firms that there will not be any “alignment” with the European Union following Britain’s departure from the bloc on 31 January despite calls from business leaders, insisting that companies had three years to prepare for the new economic reality.

“Once we’ve got this agreement in place with our European friends, we will continue to be one of the most successful economies on Earth”, the treasury chief added.

Speaking to FT, Javid also insisted that while some UK companies could indeed lose from Brexit, he was okay with this, signaling the need for businesses to “adjust” to the new trading relations.

“There will be an impact on business one way or the other, some will benefit, some won’t”, the chancellor concluded.

The treasury chief’s remarks are set to spark even more worries among British businesses, including large manufacturing sectors, especially in automobiles and food production, which now fear that the absence of close arrangements with the EU will only result in the introduction of new checks and higher prices.

“It will mean businesses will have to adjust to costly new checks, processes, and procedures that will act as a barrier to friction-less trade with the EU and may well result in price rises”, Food and Drink Federation chief Tim Rycroft said following Javid’s interview, as quoted by AP.

UK PM Boris Johnson Says a Clock Will Be Projected onto Number 10 on Brexit Day
Britain is finally set to leave the European Union on 31 January following three years of debates and negotiations, but trade talks with the remaining member states are expected to continue over an 11-month transition period.

While the EU earlier suggested that London could benefit from zero tariff trade with the bloc in exchange for staying tied to European regulations, Boris Johnson threw aside this option, signaling a need to completely break from Brussels’ legislation.