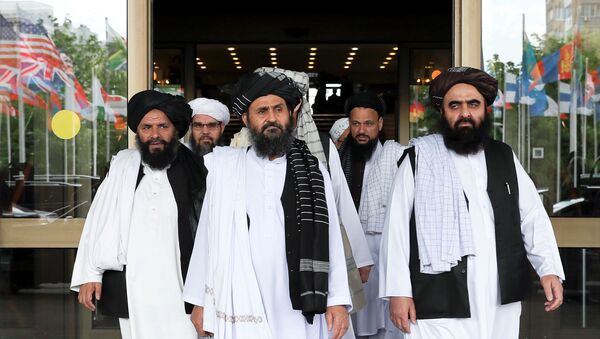 © REUTERS / Evgenia Novozhenina
Subscribe
KABUL (Sputnik) - With the consultations on Afghan peace ongoing in the Qatari capital of Doha, the Afghan government and the rival Taliban radical group appear to disagree on roadmap to achieving comprehensive peace through ceasefire.

Throughout January so far, multiple unconfirmed statements have been suggesting that the Taliban have committed to reducing violence as an initial step toward coming to an official ceasefire accord with the government. Sputnik's sources in Qatar said Taliban leader Mullah Habitullah is expected to pledge commitment to reducing violence in writing.

It now appears that the government in Kabul considers such pledge insufficient and wants the group to make a leap straight to the ceasefire agreement.

"The reduction of violence is not clear, we want a ceasefire, which is why we insist on a ceasefire. War is not in the interest of the Taliban and so far didn't bring or get any achievements," Afghan presidential spokesman Sediq Sediqqi told journalists at the Government Media Centre on Saturday.

He added that now that the Afghan government gets informed about progress of the Qatar talks, they can be expected to bring about results.

The Taliban, in turn, see the reduction of violence as a step toward comprehensive ceasefire, the group's Attorney General Jalaluddin Shinwari told Sputnik.

For Kabul, however, ceasefire comes first. Defence Ministry spokesman Rohullah Ahmadzai told Sputnik that the Afghan army would continue fighting the Taliban until the group agrees to lay down arms.

"Afghan forces are fighting for peace, we want radical peace and the opposite side does not want basic peace. In some provinces, the Taliban have laid down their arms and have a decent or good life. If the Taliban choose this path, it is for the benefit of all Afghans," Ahmadzai said.

In pursuit of recognition, the Taliban have been leading insurgency against the Afghan government since the early 2000s. They also seek all foreign troops to withdraw from the country. The group has been accused of providing terrorist organizations such as al-Qaeda (banned in Russia) and the Islamic State (banned in Russia) with safe haven in Afghanistan.

Over the past year, the US held a number of peace talks with the Taliban in a bid to encourage the group to cut the ties with terrorists and begin rapprochement with the Afghan government, paving the way for US troops to pull out. No significant results have so far been achieved during these talks.