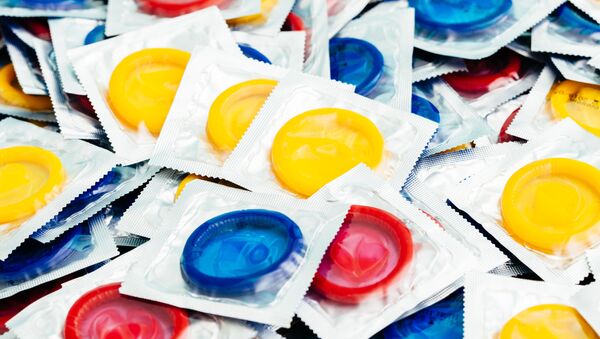 Health officials in the US state decided to draw attention to an HIV awareness campaign that distributed condoms with catchy slogans on the wrappers. They re-phrased well-known Utah memes to give them sex references, but the local authorities seemed to be unimpressed with their creativity.

Utah’s governor, Republican Gary Herbert, has ordered to stop distributing condoms under a local HIV awareness campaign run by the state’s health officials and sponsored with federal funds because of sexual innuendo on the wrappers.

“The Governor understands the importance of the Utah Department of Health conducting a campaign to educate Utahns about HIV prevention. He does not, however, approve the use of sexual innuendo as part of a taxpayer-funded campaign, and our office has asked the department to rework the campaign’s branding”, the statement from the governor’s office, cited by The Salt Lake Tribune, reads.

The branding that prompted state authorities to suspend the distribution of condoms featured captions like “Greatest Sex on Earth” (tribute to the Utah slogan “Greatest Snow on Earth”), “SL,UT” (reference to the state and its capital’s names), as well as pictures of a road sign with towns “Fillmore” and “Beaver”.

These now-cancelled innuendo-filled condom wrappers from the Utah Department of Health were... extremely good for something from the government pic.twitter.com/CpvUl8CcEA

​As was explained by an official from the Utah Department of Health’s Prevention Treatment and Care Programme, Erin Fratto, before Herbert’s order, such an approach was “just to destigmatise HIV in Utah, and get everybody talking about sexual health” as well as to provoke a free discussion.

“If the condoms are fun, relatable, sex positive — people are more apt to talk about them, which we’ve already seen”, she said.

​However, following the veto, the department backed down and apologised for the “offensive packaging”, as they referred to it.

“The designs did not go through necessary approval channels and we have asked our partners to stop distributing them immediately. We regret the lewd nature of the branding. We remain committed to running a campaign to help in the prevention of HIV and intend to do so in a manner that better respects taxpayer dollars, and our role as a government agency”, their statement said.

The Department started spreading as many as 100,000 condoms earlier in January after "The H is for Human” campaign was launched to counter HIV, which can evolve into AIDS.