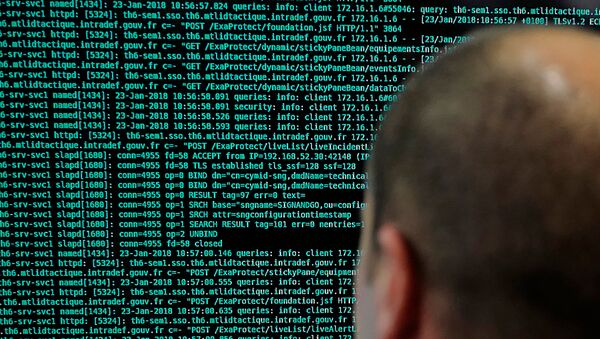 © AP Photo / Michel Spingler
Subscribe
Mohamed Elmaazi
All materialsWrite to the author
Scottish police are setting up computer stalls across the country which can quickly access data on people’s electronic devices, as of 20 January 2020. They say this will “provide a better service” to the public by “quickly identifying” which devices contain evidence which may be useful to police investigations.

Leading digital rights organisations have sounded the alarm over the large scale roll-out of ‘Cyber Kiosks’ by Scottish police, which they say do not sufficiently protect the right to privacy and of informed consent. The idea behind these electronic specialist booths within police stations will be to quickly examine, and if deemed necessary retain data from mobile devices. However, Privacy International and Open Rights Group say that police powers don’t meet human rights standards of “accessibility and foreseeability for the individual”.

“Our mobile phones are unlike any other piece of personal property. Access to our devices means access to our photos, videos, contacts, messages, even messages we have not sent, our notes, our calendars, our browsing history, even our locations”, the two civil liberties groups say in a statement dated 16 January 2020.

Both organisations claim that the legal regime in Scotland is not fit for purpose to address the level of intrusion that such Cyber Kiosks can represent. Victims, witnesses and suspects are all being offered the ability to ‘consent’ to the police examining their some of their most intimate and personal data on the basis that the process will be quick and assist legitimate investigations. But it could be “deeply confusing and harmful” for people to discover that once they agree to their devices being examined they will have “no right” to change their mind or to request the return of their devices.

Privacy International and Open Rights Group are calling for increased legal safeguards to address these types of concerns before the roll-out of Cyber Kiosks begins, but the government has chosen to go ahead despite concerns raised.

For their part the police say that the Cyber Kiosks offer a ‘win-win’ for police and the public because normally devices can be kept by police for weeks or even months if they seize them using police powers (eg with a warrant or after an arrest).

Cyber Kiosks Are Necessary In a Changing World, Say Police

“By quickly identifying devices which do and do not contain evidence, we can minimise the intrusion on people’s lives and provide a better service to the public”, Deputy Chief Constable Malcolm Graham said in a statement on 14 January, when the Cyber Kiosk roll-out was announced.

41 Cyber Kiosks are expected to be operational in police stations across Scotland by March 2020. Graham argued that they are needed due to the changing nature of technology and how people interact and socialise. Because people now lead a “significant part” of their lives online police investigations and evidence presented to courts must reflect that reality Graham said. He also went on to explain that “many online offences disproportionately affect the most vulnerable people in our society, such as children at risk of sexual abuse, and our priority is to protect those people”.

A Cyber Kiosk is essentially a desktop computer with specialist software on it which allows the police to more easily search though a device an access key data such as phone call history, internet browsing, photos and videos, and text messages and emails. If police seize a mobile phone it can take anywhere from days to months for people to get their device returned. The police say that if people volunteer their devices to be examined at a Cyber Kiosk, the intrusion is reduced because their devices can be more quickly examined and then returned to them if there is nothing on the device deemed useful for an investigation. If an examining officer determines that there is something on the mobile device it will then be passed on for further examination. It is unclear why, if a Cyber Kiosk can examine a device within a short time period why they can’t also be examined quickly if they are seized via a warrant or an arrest.

Authorities also defend their Cyber Kiosks by saying that they can’t store data from a phone after it has been examined and that only specific types of information will be sought out depending on what an investigating officer has decided is necessary. Police Scotland say they will only ever examine devices where it is deemed necessary, justified and proportionate to do so further to a lawful investigation.

Neither Police Scotland nor Privacy International and Open Rights Group responded to requests for comment by the time of publication.