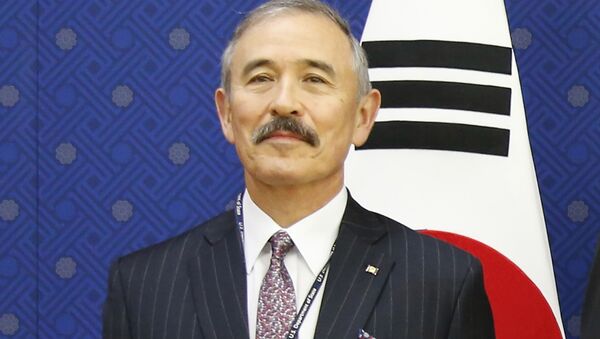 Apart from his personal appearance Harry Harris has angered South Koreans with his support for Donald Trump’s demands to increase payment for US military protection to $5 million, as the country hosts more than 28,000 American servicemen.

The US ambassador to South Korea has been accused of insulting the host country by… sporting a thick moustache. South Koreans say that Harris’ facial hair and ancestry reminds them of the days when the country was ruled by Japan. The 63-year-old, is a former Navy admiral, who was born in Japan to a Japanese mother and US military officer.

The ambassador said he was being singled out because of his background and noted that he had decided to grow a moustache to mark a new period in his life. "I wanted to make a break between my life as a military officer and my new life as a diplomat. I tried to get taller, but I couldn’t grow any taller, and so I tried to get younger, but I couldn’t get younger. But I could grow a moustache, so I did that”, Harris said in an interview with The Korea Times.

The newspaper said that Harris’ moustache has become associated with the “US latest image of being disrespectful and even coercive” toward Korea. Harris was criticised both online and offline for being more like a governor-general than an ambassador, a reference to South Korea’s troubled colonial past. Social media users noted that all Japanese governors-general wore thick moustaches.

Harris also drew harsh criticism from South Koreans by supporting Donald Trump demands that Seoul shell out for US military protection. Trump said the South Korean government must pay $5 billion for Washington’s aid - that is more than five times the amount Seoul paid last year. In October of 2019, 19 students tried to break into Harris’ official residence to protest his support for increased payments.

The ambassador also found himself in hot water over his calls on Seoul to step up efforts to repair ties with Japan amid a nuclear crisis with North Korea. Tokyo’s colonial rule over Korea (1910-1945) has been a point of bitter contention between the two sides, in particular, forced labour and comfort women or sex slaves during the Second World War. In 2019, ties between neighbours deteriorated even further, this time due to a trade conflict.

As for the moustache it seems it is here to stay because Ambassador Harris noted that South Koreans need to convince him that his facial hair somehow hurts the relationship between Seoul and Washington. "I am who I am. All I can say is that every decision I make is based on the fact that I’m the American ambassador to Korea, not the Japanese American ambassador to Korea”, he told The Korea Times.