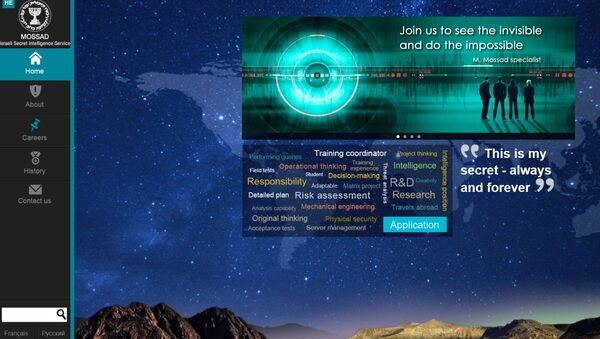 © Photo : Mossad website / screenshot
Subscribe
International
India
Africa
Although Ashraf Marwan, known as one of Israeli intelligence’s valuable assets under the code name “Angel”, died under suspicious circumstances in London years ago, speculations about his work continue, including allegations that he was a double agent. The control who ran him for decades is now shedding light on his story.

A retired staffer from the Israeli intelligence service Mossad has refuted claims that former Egyptian President Anwar Sadat’s aide Ashraf Marwan, who passed on information to Tel Aviv for years, was a double agent in an interview with the outlet Haaretz. The 85-year-old, who asked to conceal his identity and was featured in the article as Dubi, acted as a handler for the valuable asset at the very top of the Egyptian establishment and regularly met him. He describes the agent, whose code name was “Angel”, as the Egyptian president's confidant and mediator with the Saudi and Libyan intelligence chiefs, who was “like a brother” to Libyan ruler Muammar Gaddafi.

As the former Mossad staffer confirmed, Marwan first contacted Israel himself. His motives remained unknown, however, and this bothered headquarters in Tel Aviv, according to Dubi, who explained that “intelligence personnel don’t like volunteers and are wary of them". As Dubi suggested, their Egyptian asset “wanted money and lots of it".

As Dubi recalls, their agent received unprecedented sums of money for each time that he provided information, something akin to $100,000. After he got rich from arms deals, however, he ceased to take money.

“I am thankful for what you did for me, but now I have my own security. I don’t want to be your salaried employee, and from now on I will do it voluntarily, from friendship", he told Dubi at the time.

One of the gems, delivered by Marwan, was the warning about the upcoming Yom Kippur War in 1973 between Israel and the union of Arab nations. Two days before it broke out on 6 October 1973, Marwan is said to have contacted the Israelis by phone and said in a special code, chosen due to his chemistry degree, “Chemicals”, adding “Many chemicals, a great many”, which referred to the upcoming war. Then-Mossad chief Zvi Zamir, Dubi, and Marwan agreed to meet in London.

The transcript or details of the talk cannot be disclosed. But Dubi conveyed the spirit of the meeting. While Zamir preferred to ask about the triple union of Egypt, Libya, Syria, and the Palestinian terrorists’ plans, the Angel was impatient: “Let’s talk about the war".

According to Dubi, the “Angel” also explained that the date for the start was chosen due to a holiday in Israel and added that the Egyptians planned to cross the Suez Canal into Sinai. He also revealed that the chance for war was 99 percent and said that the campaign was to start at sunset, which later turned out to be false. This information was passed to the Israeli leadership and Prime Minister Golda Meir. Some Israeli leaders, including Defence Minister Moshe Dayan and IDF generals allegedly paid little heed to his warning. In addition, the Arab forces launched their offensive earlier than was presumably planned.

As Haaretz’s report suggests, passing this intelligence info cost Marwan a lot. According to Zamir, former head of Military Intelligence Gen. Eli Zeira acted to make Angel’s name public in 2002, five years before Marwan’s mysterious death when he was found dead in the garden below his London apartment.

Zeira, who predicted a “low probability” of war on the morning of 6 October, was a “chief purveyor” of the theory that Marwan was a double agent, a claim that Dubi denies, defending his asset.

“Marwan reported on the night between Friday and Saturday that the war would erupt at sunset. He didn’t know that Sadat had moved up the opening hour to 2 P.M., as Assad had requested of him a few days earlier. And in any case, would those four hours have changed anything?” he argued.

Mossad Chief Suggested Publishing Intel in 1973 to Avert Yom Kippur War - Cable
He also accused Zeira of lying. The latter insists that Marwan did not report about Sadat and Saudi King Feisal’s meeting in Riyadh to request financial aid and imposition of an oil embargo.

“That is a lie. Zeira is lying – and how – only to absolve himself of the responsibility and impose it on Mossad. I met Marwan after the Riyadh meeting, and with my own eyes I saw the material he conveyed to us about that meeting", the retired agent told Haaretz.

The retired general, however, declined to comment on the accusations.