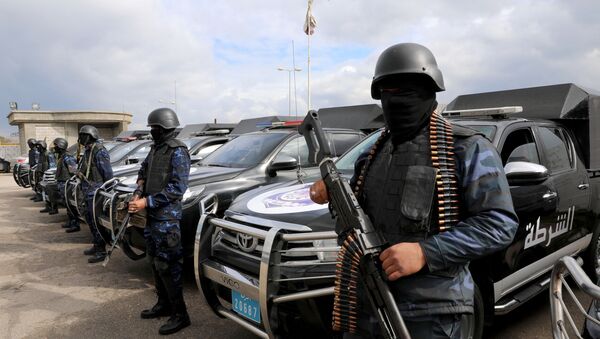 © REUTERS / ISMAIL ZITOUNY
Subscribe
The UN-led Berlin Conference on Libya on 19 January, with the participation of major world powers, is to welcome both heads of the Government of National Accord (GNA) and the Libyan National Army (LNA). The high-level meeting following the Moscow talks is expected to further pave the way for a solution to the Libyan crisis.

The president of the Tobruk-based Libyan parliament, Aguila Saleh Issa, who supports Field Marshal Khalifa Haftar, has in an interview with Sputnik shared his thoughts on how the Libyan crisis can be resolved. He also noted that the Libyan Army operation in Tripoli is not about restoring military power in Libya.

Sputnik: How do you assess the latest events in Moscow? Why do you think the agreement was not signed?

Aguila Saleh Issa: At this meeting, we were offered a final communiqué, on which the Russian government worked hard. But we did not sign it because it takes time to study all the points thoroughly. A lot of conditions were set out in the document, and the situation was also marred by the presence of the Turkish side.

Sputnik: You have requested 48 hours to study the document. The deadline has expired, what is your decision?

Aguila Saleh Issa: We postponed the study of the document since we have not yet met with the field marshal after the latest negotiations; he is still in Egypt. The date of the conference in Berlin, where some solutions can be reached, is getting closer.

Sputnik: In addressing the Arab Parliament (the Arab Parliament is the legislative body of the Arab League – ed. note Sputnik), you spoke about the need to sign a joint agreement on Arab defence and a possible request to the Egyptian side for military intervention. Have there been any negotiations in this direction?

Aguila Saleh Issa: We don't need military assistance yet. But if there is a Turkish invasion, as Turkish President Recep Tayyip Erdogan was threatening, we will need the help of Egypt or Algeria or some other country. Of course, we are considering the Arab states first and foremost.

Sputnik: Are there any Arab countries preparing to intervene in the Libyan situation if there is a Turkish invasion?

Aguila Saleh Issa: I believe that if a Turkish invasion does happen, none of the Arabs will hesitate. Libya has a rich history of valorous cooperation with Egypt, Algeria, and other Arab countries. We think the Arabs will take a clear position on this issue.

Sputnik: Some are worried that if the Libyan Army takes over, the country will re-establish military power. How do you respond to that?

Aguila Saleh Issa: This is a misguided belief. First, the Libyan National Army has stated that the operation in Tripoli is necessary to counter terrorist groups whose fighters are wanted locally and globally. These men captured the capital a few years ago. They took the Al-Wefaq government hostage. The army can't ignore it, the city needs to be liberated. It has been openly stated that there is no talk of a coup, of taking over territory, of taking sides with some Libyan force. All we have to do is drive out the terrorist groups.

Sputnik: So can we assume that there is no goal to restore military rule in the country?

Aguila Saleh Issa: Of course not. We have an elected parliament, a constitution that regulates the political process in the country. Nobody is talking about military power.

Sputnik: On the one hand, there are some claims that the Al-Wefaq government's term has expired. On the other hand, in Tripoli, we hear them say that parliament has reached the end of its term as well. How do you explain that?

Aguila Saleh Issa: The international community adopted a political agreement that limited Al-Wefaq’s term of office to one year, renewable for another year. But all the terms have expired. The agreement also stated that the Al-Wefaq government should receive parliamentary approval, but this did not happen.

Sputnik: At the upcoming Berlin Conference, a division is expected between different international political forces that will support the different parties to the Libyan conflict. Will that prevent an agreement from being reached?

Aguila Saleh Issa: The crisis will be resolved by a change of political power. The situation may stabilise as soon as the current government (Al-Wefaq) changes. In four years this government has been unable to do anything, I think that's enough.

Sputnik: What is the fate of the agreements that the Al-Wefaq government has made with other countries?

Aguila Saleh Issa: They have no legal effect. Sovereign decisions must be made jointly with the Presidential Council (the highest executive body in Libya, formed under the terms of the Skhirat Agreement signed on 17 December 2015, and headed by Fayez al-Sarraj – ed. note Sputnik), and this was not the case. Also, the agreements did not receive support from the parliament.

Sputnik: How do you assess Russia's role in resolving the Libyan crisis?

German Foreign Minister Maas Says LNA's Haftar Has Agreed to Libya Ceasefire
Aguila Saleh Issa: Russia plays an integral role in resolving the Libyan crisis. I am very grateful to Russian President Vladimir Putin and the Russian government for their reception and hospitality. Many efforts have been made, but the presence of Turkish politicians has complicated the situation. They have contributed to the growth of the crisis, and they have no place in the resolution of it.

Sputnik: Italy has stated the possibility of sending its troops to Libya. Can we say that this would be the beginning of numerous interventions?

Aguila Saleh Issa: We are against any invasion. We cannot ask for foreign assistance in confronting Libyans. As for Italy, the maritime memorandum signed between al-Sarraj and Turkey is not in its interest. In the case of foreign intervention, we will seek help from our Arab brothers.