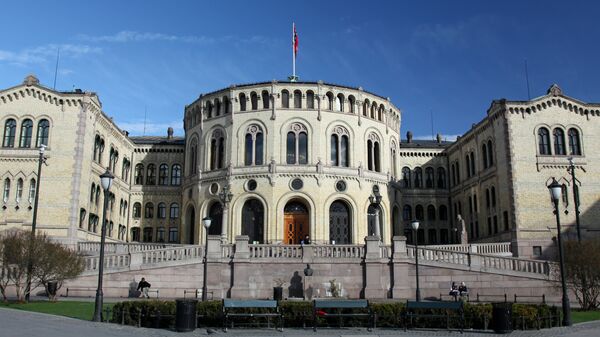 As the right-wing Progress Party is threatening to leave Prime Minister Erna Solberg’s centre-right coalition, this may spell the government's downfall.

The Norwegian government's surprise decision to repatriate a 29-year-old Daesh* widow with two small kids on account of one of them reportedly being sick was the last straw for the Progress Party, its leader, and Finance Minister Siv Jensen told national broadcaster NRK.

The Progress Party opposed helping the charged Daesh widow in any way and stressed that it had “no sympathy” for the situation that left her stranded in the de-facto Kurdish-administered Al-Hol camp in northern Syria, only to see their senior government partners the Conservatives side with their smaller sidekicks, the Liberals and the Christian Democrats, whose goal was to help the children at all costs, even if it meant helping the mother as well.

While the Liberals and the Christian Democrats rejoiced, Progress Party tops, including former Immigration Minister Sylvi Listhaug suggested that the Pakistani-Norwegian mother was “cynically exploiting” her children's repatriation for her own benefit.

“We won’t sit in a government at any price”, Jensen warned, promising to deliver a list of demands for the Progress Party's continued government support. Jensen stressed that her party had “too much difficulty winning support for issues that concern us” and accused the Conservatives of “leaning too much in favour of the Christian Democrats and the Liberals”. This, according to Jensen, “made our politics grey and boring”.

Norwegian PM Denies 'Secret Islamisation' of Her Country
A stricter immigration policy is among the top issues county leaders in the Progress Party are now calling for in exchange for their support.

“One of the most important things for the Progress Party is to have an impact in the field of refugee, asylum, immigration, and integration policies”, Viken group leader Lavrans Kierulf told NRK.

“If Progress is to remain in government, we must feel the feeling of winning”, Vestfold county leader Frode Hestnes said, citing taxes, transport, immigration, and oil recovery as important areas.

“We are the next-largest party in the government, and that should be reflected in the government’s policies. That’s now difficult to see”, Jensen stated on the Progress Party's website. “We can’t just always end up with compromises that none of the partners are satisfied with”, Jensen told NRK. “I have the impression there’s too much wear and tear among us. This is a very good opportunity to move forward, and make some decisions”.

Some were even less optimitisic.

“The party is shaken after it became known that the government is bringing home the [Daesh] woman. I believe we're going to leave government. I do not see a case in which we can have a breakthrough that makes us sit in government”, Progress MP Kari Kjønnås Kjos said.

Additionally, the Liberals leader Trine Skei Grande already voiced outright opposition to any extra demands, which may spell trouble for the Solberg government.

Last January, the Conservatives were able to form a minority “blue bloc” coalition government with the Progress Party, the Christian Democrats and the Liberals, after a series of compromises. At 25.0 and 15.2 percent of the vote respectively, the Conservatives and the Progress Party are key parts to the ruling centre-right “blue” bloc, whereas the Liberals and the Christian Democrats combined account for 8.6 percent.

The Daesh widow in question, who has stayed in the Middle East since 2013 and has changed several jihadi spouses in the process, is expected to arrive to Norway on Friday, 17 January.