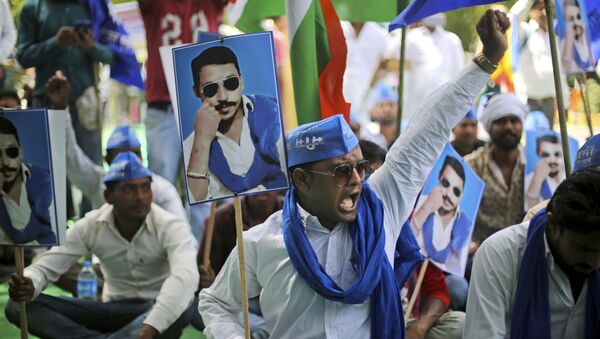 New Delhi (Sputnik): Police in India’s national capital arrested the leader of a Dalit (underprivileged caste) political group, the Bhim Army on 20 December. He was protesting outside the Jama Masjid Mosque in the old part of Delhi against the new citizenship law.

Bhim Army Chief Chandrashekhar Azad is visiting religious shrines in Delhi on Friday after being released from Tihar Jail on Thursday night.

Azad visited Jama Masjid and said that peaceful protest is our strength. "People from all religions who support us should join us in great number to prove it to the government that these protests are not led by Muslims alone," he said. Azad also read Preamble of the Constitution at Jama Masjid, where people against Citizenship Amendment Act had also reached.

Earlier On his visit to Ravidas Temple, he said: “The purpose is to mark a protest against the Citizenship Amendment Act and National Register of Citizens and also to tell people that such black laws can't be imposed on us.”

While listening to Azad’s bail plea on Thursday, the court had said: “Delhi Police were directed to escort Azad to his residence in Saharanpur city in the Indian state of Uttar Pradesh within 24 hours of his release. Whereas if Azad wishes to visit any place in Delhi including Jama Masjid or Ravidas Temple, Delhi Police shall not stop him before leaving for Saharanpur.”

Additional Sessions Judge Kamini Lau had granted him bail on the condition that he will have to stay away from Delhi for a month. He has also been told not to hold any protests in the national capital.