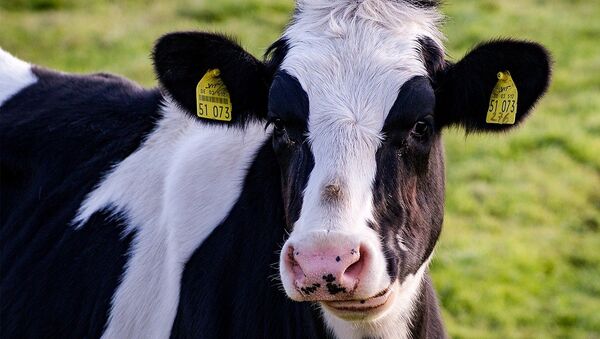 New Delhi (Sputnik): A post by the Kerala Tourism Department has exacerbated a pork-versus-beef debate by featuring a picture of its popular beef dish. While the Muslim population abstains from eating pork, calling it blasphemous, the majority Hindu population considers cows as sacred and opposes the slaughter of the animal.

The Tourism Ministry of the Indian state of Kerala came under fire after its official Twitter page posted a picture of a beef dish called “Ularthiyathu” in order to promote it.

Tender chunks of beef, slow-roasted with aromatic spices, coconut pieces, and curry leaves. A recipe for the most classic dish, Beef Ularthiyathu, the stuff of legends, from the land of spices, Kerala: https://t.co/d7dbgWmlBw pic.twitter.com/aI1Y9vEXJm

While retail of beef is banned in certain states in the country due to religious sensitivity of millions of people in India towards cows, a section of netizens was left stunned and irked by Kerala promoting beef, unmindful of the religious sentiments of the public at large.

Cow slaughter and the sale of beef is banned in several Indian states, including the national capital city of Delhi. However, Kerala, along with some north-eastern states, have no such restriction.

The controversy led to a #pork trend in India, with over 27,000 mentions as people slammed the tourism department and asked them to promote pork dishes instead, but which is forbidden among Muslims.

The controversial debate on beef bans triggered a Hindu-versus-Muslim issue, as the latter dominate the meat trade in India. Muslims also share similar sentiments with respect to pork, as it is forbidden under Islamic laws.

This is nothing but provocation. You people don't want people from North India to visit Kerala? Why this beef promotion? People visit to Kerala just to eat beef? Try promoting Pork for a change, you will get a taste of your medicine.

I understand people do eat beef in kerela but whats the need to glorify something which hurts the sentiments of one community.

I challenge @KeralaTourIndia if they'll update something made out of Pork.

Pathetic, Should have displayed Sadhya, puttu, appam anything.

are you out of your mind? on Pongal and Sankranti when we revere Cows, Oxen, and Cattle for their contribution to mankind's easy existence and culture...on one hand we have Gangireddula meLam in Telugu states, Jallikattu in TN, and Kambala races in Karnataka and you showcase this

Many who have vehemently opposed promoting beef said that tourism to Kerala should be boycotted and Keralites should not be allowed in temples.

Just this as made all my Karala tour plans cancelled altogether. I will rather tour Karnataka and Tamil Nadu. https://t.co/URY4yPSF2u

Really hindus .. shoukd take serious on this subject..& stop going to kerala & promoting also...we should visit only our temples...not other areas..there is a limit ...this state is crossing there limits...idoits..

If you visit Kerala despite their hatred towards our culture and traditions then you are strengthening the hands that want to kill you.

However, there were some who held an opposite view and supported the Tourism Department of Kerala.

Dedicated to all Sanghis who have problem with our Diet and Culture. Here in Kerala we Hindus eat what we want including Beef and Pork and let others eat what they want.

Proud to be a Keralite Hindu! pic.twitter.com/GNWndKowuj

The protection of cows, considered sacred by Hindus, continues to be underpinned by vigilantism led by fringe groups. The country has also seen several mob lynching incidents in which men, mostly Muslims, have been beaten by mobs on the suspicion of cow smuggling or for eating beef.

The Prime Minister Narendra Modi-led Bharatiya Janata Party government has called for ban on cow slaughter and the trade in many states, like Rajasthan, Uttar Pradesh, Delhi, Haryana, Gujarat, Himachal Pradesh, amongst others.