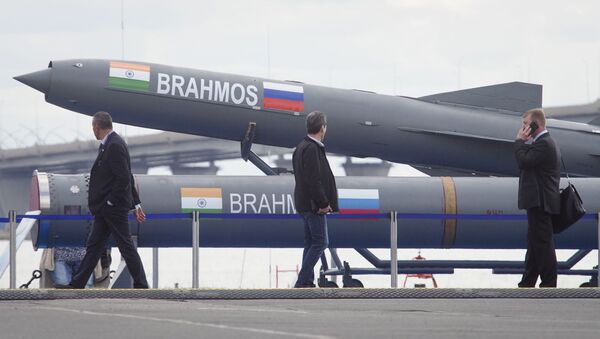 BrahMos is the most successful Russian-Indian military-technical cooperation project, Russian military expert Vasily Kashin told Sputnik. BrahMos is currently carrying out active marketing for these powerful anti-ship missiles in Southeast Asia and the Middle East, in a total of 14 countries.

India, assisted by Russia, has launched a family of supersonic cruise missiles to engage land and sea targets at a speed of 2.8M. Its basic versions for the Navy are based on the design of Onyx Russian supersonic anti-ship missiles. Variants of missiles have been created for land forces and the Air Force with extended range that are based on Russian anti-ship missiles. At present, India, with Russia's help, has established the production of such missiles, creating several dozen per year.

India has long been wanting to switch to BrahMos missiles exports, which would be an important step on the long road to transforming the country from a major arms importer to an important military-industrial centre. Southeast Asia and the Middle East are regions that play a priority role in India's foreign policy and foreign economic relations. India has significant influence in these regions, which is why they have been chosen as the main directions for promoting this missile.

There have been talks about the possibility of supplying BrahMos missiles to Vietnam for some time, but this country has purchased Russian Bastion coastal missile systems with an export version of Onyx missiles. According to the latest reports, the Philippines may become the first country to purchase BrahMos missiles. In December 2019, Philippine National Defence Secretary Delfin Lorenzana said the country was interested in buying two BrahMos missile batteries and suggested that a contract could be signed in the first half of 2020.

The purchase of powerful anti-ship missiles by the Philippines is a logical step. An island nation of more than 100 million people requires means to control key areas adjacent to it. The normalisation of Sino-Philippine relations under President Rodrigo Duterte does not negate that necessity. Two batteries won't change the balance of power in the region, but the Philippines' capability to defend itself without turning to the US and its allies remains of greater importance to the region. A deal involving substantial, albeit indirect, Russian involvement is likely to displease the United States.

Video: India Tests BrahMos Cruise Missile Amid Tensions With Pakistan
Enhanced India-Philippines cooperation occurred after Narendra Modi assumed the post of Indian prime minister. In November 2017, Modi became the first Indian PM to visit the Philippines. Philippine foreign policy is built around a reasonable balance between the US and China, and no other country can match the influence of these countries on the Philippine economy and politics. However, as the Philippines moves toward multi-vector policies, it is understandable for it to seek close cooperation with as many partners as possible.

The Philippines’ potential purchase of Russian-Indian missiles shows that another large and important country is slowly but surely turning from a junior ally of the US into an independent political player, and this plays a significant role for Russia and China's interests.