Kusturica: 'Assange is Dying, but Instead of News About Him We Are Bombarded With Junk Information' 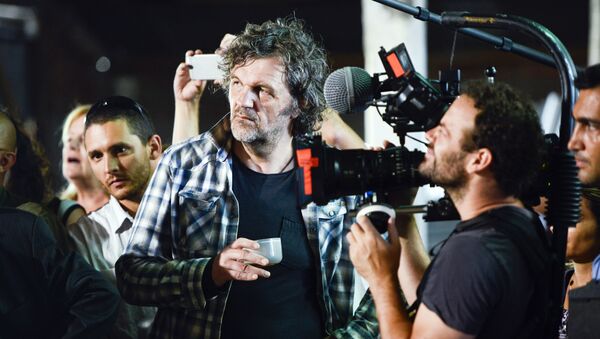 Kusturica has called for the release of the WikiLeaks founder, who faces 175 years in prison for his role in publishing classified documents, some of which expose alleged war crimes committed by US forces in Iraq.

“Serbia is one big province. There has been no news about Assange in Serbia since he was in what would be called 'top news' in Belgrade. The only media talking about him is Sputnik, because you have a Russian spirit, and Russia cannot be left without information", he said.

The filmmaker appeared at the 13th Kustendorf Festival wearing a t-shirt saying “Freedom for Julian Assange", which aroused great interest in those present. According to Kusturica himself, his intention was to remind everyone that it has happened throughout history: there are people who really make a difference, and then the world neglects them when they cease to be important.

“Instead of news about him, there is a far-fetched idea in Serbia that there was once a man who revolutionised information and gave us all that information – both about our people and about various events we didn’t know about. Now this man is dying, but there is no news about this. We are bombarded with our local junk information, which spins day by day and constantly suggests that life is dangerous, lest we accidentally think we could change it", the founder of the Kustendorf Festival added.

On 13 January, a hearing on Assange's extradition to the United States began in Westminster Magistrates' Court in London. The WikiLeaks founder attended the hearing in person.

At the hearing, District Judge Vanessa Baraitser ruled that the next session would take place on 23 January and that Assange would take part via a video conference.

In December, the court ruled that Assange's extradition case would consist of three separate stages, with hearings scheduled throughout January and February.

Assange Case: 'Lawyers of WikiLeaks Founder Becoming Increasingly Inaudible' - Publicist
Assange, who was initially accused of sexual harassment and rape in Sweden in 2010, was in hiding at the Ecuadorian Embassy in London from 2012 to 2019. In April 2019, UK police entered the embassy to arrest the WikiLeaks founder, and he was eventually sentenced to 50 weeks in prison for breaching bail conditions.

In May, the US Department of Justice indicted Assange on 17 additional charges under the Espionage Act and demanded his extradition. If convicted of these charges, the WikiLeaks founder faces up to 175 years in prison. The UK home secretary at the time, Sajid Javid, approved the extradition request, stating that he did not believe Assange would face death or torture if extradited.

000000
Popular comments
His devotion will carry on living, long after the divine forces will receive him with ONOR. He did not betray his legacy of his direct ancestors, choosing a name that says "I shall resurrect" or " Of celestial 'blood' ". It shall be the greatest TEST for the UK system of justice, if there is any CONSCIENCE left in it. If there is none left then.... the 'pacient' can be declared.... DEAD.
Lissandra
16 January 2020, 08:43 GMT2
000000
It is disgusting the non-role Australia is playing toward its citizen. Absolute silence, hipocrite silence. Absolutely unacceptable for a country that promotes itself as a "democracy" all for human rights and free speech
Luitenant Colonel
16 January 2020, 10:28 GMT2
000000
Newsfeed
0
New firstOld first
loader
LIVE
Заголовок открываемого материала
Access to the chat has been blocked for violating the rules . You will be able to participate again through:∞. If you do not agree with the blocking, please use the feedback form
The discussion is closed. You can participate in the discussion within 24 hours after the publication of the article.
To participate in the discussion
log in or register
loader
Chats
Заголовок открываемого материала
Worldwide
InternationalEnglishEnglishMundoEspañolSpanish
Europe
DeutschlandDeutschGermanFranceFrançaisFrenchΕλλάδαΕλληνικάGreekItaliaItalianoItalianČeská republikaČeštinaCzechPolskaPolskiPolishСрбиjаСрпскиSerbianLatvijaLatviešuLatvianLietuvaLietuviųLithuanianMoldovaMoldoveneascăMoldavianБеларусьБеларускiBelarusian
Transcaucasia
ԱրմենիաՀայերենArmenianАҧсныАҧсышәалаAbkhazХуссар ИрыстонИронауОssetianსაქართველოქართულიGeorgianAzərbaycanАzərbaycancaAzerbaijani
Middle East
Sputnik عربيArabicArabicTürkiyeTürkçeTurkishSputnik ایرانPersianPersianSputnik افغانستانDariDari
Central Asia
ҚазақстанҚазақ тіліKazakhКыргызстанКыргызчаKyrgyzOʻzbekistonЎзбекчаUzbekТоҷикистонТоҷикӣTajik
East & Southeast Asia
Việt NamTiếng ViệtVietnamese日本日本語Japanese俄罗斯卫星通讯社中文（简体）Chinese (simplified)俄罗斯卫星通讯社中文（繁体）Chinese (traditional)
South America
BrasilPortuguêsPortuguese
NewsfeedBreaking
01:33 GMT'At the End of the Occupation' Country Faces Many Challenges - Head of Afghan National Peace Council
01:11 GMT'Human-Sized Penguin' Uncovered by New Zealand Schoolchildren Reveals Ancient Species
00:52 GMTTrump Expresses Sympathy for US Capitol Riot Suspects Ahead of September 18 Rally
YesterdayUS Approves $500Mln Military Sale to Saudi Arabia to Support Copter Fleet - Pentagon
YesterdayMinneapolis Police Department Buys ‘Not-Reaching Pouches’ to Reduce Deadly Traffic Stops
YesterdayTexas Governor Says Biden Administration Had Plans to Close Section of US-Mexico Border
YesterdayBotched FBI Probe Into Nassar Abuses Highlights ‘Endemic Failures’ Within Bureau, Former Agent Says
YesterdayTwitter Goes Bonkers After Star Batsman Virat Kohli Quits as Skipper of India's T20I Cricket Team
YesterdayHuman Hair as Pet Food? Indian Scientists Develop Unique Way to Use Keratin Waste
YesterdayBiden Retrieved on New Attack Ad Against Buttigieg Over Fears of Reprisal, Book Claims
YesterdayHow New Book About Trump Misfired, Inflicting Further Damage to Biden's DoD After Afghan Debacle
YesterdayUS Grand Jury Indicts Clinton-Linked Attorney for Making False Statements to the FBI
YesterdaySpecial Counsel Durham Allegedly Seeking to Indict Lawyer at Firm With Ties to 2016 Clinton Campaign
YesterdayOne Assassin Can Shift The Balance: Ex Lawmakers Say US Gov't Still Vulnerable to Attacks After 9/11
YesterdayPopulariser of Home Computers Sir Clive Sinclair Dies at 81
Yesterday2024 Republican Presidential Candidates Lay in Wait for Donald Trump’s Decision
Yesterday'Campaign to Destroy Trump'? Why Is POTUS 45 Under Fire Amid Defamation Suit and How Political Is It
YesterdayLabour Foreign Spokeswoman Urges ‘Strategic’ Nuke Sub Response to China’s ‘Genocide’
YesterdayFrance Reportedly Cancels Washington Gala After 'Betrayal' Submarine Deal
YesterdayUnbelievably Slow Hypersonic Bureaucracy