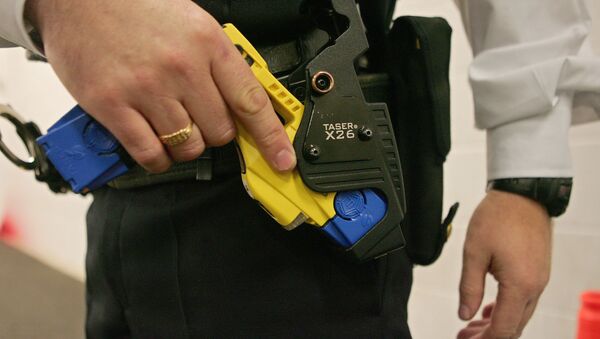 © AFP 2021 / CARL DE SOUZA/FILES
Subscribe
The Hong Kong Police Force (HKPF) may soon be equipped with electroshock devices, net guns and other “less lethal” options to combat anti-government demonstrators across the city in an effort to “boost the force’s capability to curb violence.”

A senior police source revealed to the South China Morning Post earlier this week that the HKPF has been actively exploring a variety of non-lethal and less lethal options for anti-riot officers as protest-related violence continues to take place in Hong Kong.

“The purpose is to enrich the use-of-force options, instead of increasing the force level or bringing in lethal weapons,” the anonymous source told the Hong Kong-based, English language newspaper. “It benefits both officers and suspects, as the longer the suspect resists or struggles [during arrest], the higher the chance we both get hurt.”

John Lee Ka Chiu, Hong Kong’s secretary for security, broadly responded to reports of the devices’ introduction to the HKPF and told lawmakers that “the Security Bureau supports any method to better enable the force to deal with violence while reducing casualties.”

“Any equipment being studied by police are already in use by [police] forces in foreign countries and have a good track record in reducing casualties. These studies are ongoing,” he added.

The use of Taser stun guns and similar electroshock devices has become commonplace in law enforcement agencies of the US and UK. The Guardian recently reported that the use of Taser-brand stun guns within England and Wales police forces had reached a record high after UK Home Office figures showed the electroshock devices were fired 2,500 times by officers between April 1, 2018, and March 31, 2019. The data also revealed the weapons were brandished during 23,000 instances in the same period.

However, due to the risks associated with the high-voltage electroshock device, many police forces in the US have also introduced handheld remote restraint devices that deploy tethered ropes capable of immobilizing a suspect in a non-lethal way.

Lam Chi Wai, chairman of Hong Kong’s Junior Police Officers’ Association, expressed that the introduction of any additional devices to the force would be welcomed, as officers are “having brushes with death” when “dealing with the mobs.”

“These weapons are less lethal, and the effects on suspects are temporary. If they were adopted along appropriate tactics and guidelines, I believe they can boost the force’s capability to curb violence,” Lam said, reported the South China Morning Post.

000000
Popular comments
I may be cruel , but the use of stun guns is now necessary against the protesters but I would start off in the US embassy , many CIA operatives to be stunned , that's where the riots were planned . I wouldn't go so far as to stun Trump in the White House , but at least thing about it . Try cutting off his tweet instead .