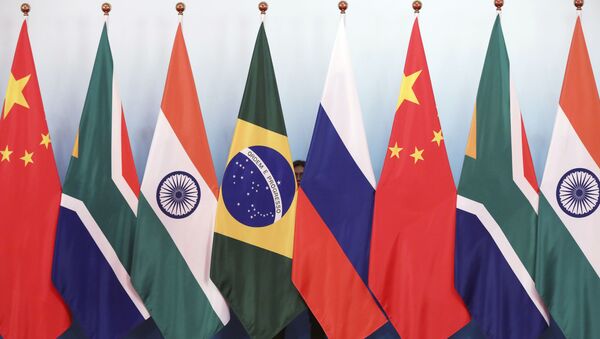 Briefing journalists on Russia's initiatives during its BRICS chairmanship, Dr Victoria Panova of the BRICS Russia Organising Committee Expert Council said that the fundamental objective of the grouping was a multipolar, multi-civilisational world order revolving around the United Nations' founding principles.

She said that the Western powers, or what she described as "Geriatric Powers", are attempting to maintain the status quo so that they don't lose their influence in the world.

“Geriatric Powers – they really don’t want to give up what has been achieved, a status quo and the influence they have in the world. That’s why BRICS started introducing new norms, not to dominate the world”, said Dr Panova in New Delhi on Thursday.

Dr Panova said that BRICS has started mechanisms and initiatives that would be in harmony with other groupings or blocs, adding that it would be fairer to accommodate the voices and interests of other countries, not just BRICS alone.

“Those initiatives may not be of very considerable interest, but in line with already existing systems like [the] WTO we have seen the Geriatric Powers (Western blocs) breaking this mechanism when it stopped serving their interests. BRICS wants to preserve this with its vitality,” said Dr. Panova.

On expansion of BRICS, the Russian expert said, it was not an exclusive bloc, but open to cooperation. “There is a consensus process and we have to make sure this would not be a thoughtless process of including more countries into its fold and compromise the efficiency of the grouping. For the moment, we want to consolidate our achievements in the short period of [the] existence of BRICS, [rather] than getting it stopped. First let those achievements be consolidated and then, it could consider deepening cooperation with other countries”.

In the wake of trade sanctions by the United States, BRICS was considering a common payment system for its member-nations. Dr Panova explained that there were some initial discussions on a system to be introduced among the member-nations so that “they are not blocked for international transfers” in trade dealings.

“A common currency for BRICS is also on the agenda, but there are a lot of technical questions and it needs to be discussed at [an] expert level”, she added.

Russian Foreign Minister Sergei Lavrov said on Wednesday that Moscow is looking to protect its interest and those of its trade partners from unilateral American sanctions. He said that increasing trade in national currencies was one of Russia’s priorities in this regard, with Moscow signing fresh agreements on currency-currency trade with China and Turkey last year, and reaching an agreement within the BRICS group of nations on the opening of accounts for such transactions.

“We consider that de-pegging from the dollar in mutual settlements is an objective response to the unpredictability of US economic policy and the outright abuse by Washington of the dollar’s status as a world reserve currency”, Lavrov observed during his visit to New Delhi to attend the annual multilateral Raisina Dialogue-2020.

Nandan Unnikrishnan, a distinguished fellow at Observer Research Foundation, a non-government think-tank, in turn, said that Indo-Russian relations were not against any country, but a mutually beneficial partnership and their national interests guide their relations with other countries.

“India maintains good links with all great powers, and I don’t think at this stage anyone in the world in their rational mind say that Russia is not a great power. It is part of India’s multi-vector policy to have good relations with all great powers. India and Russia have traditional relations, which have evolved since the late 1950s without being directed [at] anyone. It is one of the very few bilateral relations anywhere in the world with this kind of longevity that is not directed against any one country or bloc. India is not opposed to the West, Russia may be but for different reasons”, said Unnikrishnan.

000000
Popular comments
Mutual settlements based on own 'vedas' can be a tricky business for those less skilled (only the best..🎓☹️🤔😉) but it eases the situation considerably by removing interest rates, inflations and so much waste of sources/ resources at all possible levels, all 'mechanisms' that turn life into such a nightmare and inflict disequilibrium. Balanced on the outside, insightful .... on the inside, might potentially save the day. It is again, about limits/boundaries and moral Q·OD·D'OR (agreed) that will eventually turn it into an Δ 'Or·th·ulla·rt·tix' (Atlantis), say, 'gold standard 🙃(ETHICS, the real meaning)·fate·island ·wheel·univers'. Russia's turn... (it. 'orologio') орологе·a·те/ 'roulette' (meaning 'your inner clock'). Omayio! 🍸 (And so, it is such an 'island' that moves around the earth, depending on who is organising the festivity, not the military 'ghost' tower, plotting for some occult gains. It's not .... ethical.)
Lissandra
17 January 2020, 07:19 GMT1
000000
--Geriatric' Western Powers-- Ahh that made me laugh so much lol