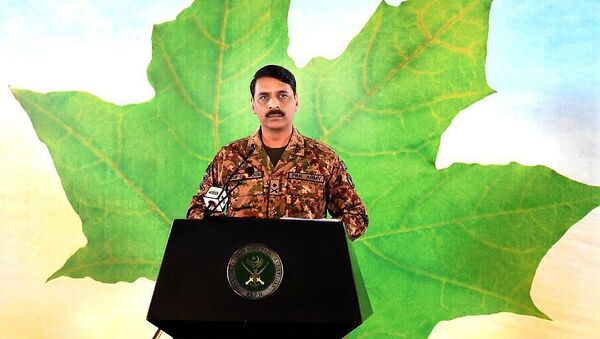 New Delhi (Sputnik): From being called out as 'Tweetusultan' for keeping his followers engaged in debates, to being mocked for his error-prone posts, the Pakistani Army spokesman misses no opportunity to be critical of India in his three years on duty.

Asif Ghafoor had been replaced by Major General Babar Iftikhar, who will now command the media wing of the Pakistani military.

Ghafoor has been handed the role of 'General Officer Commanding Okara' in Pakistan's Punjab province.

The former spokesman has been more than active on social media, especially as his Twitter feed is dominated by India-centric shares. Ghafoor, who never shys away from trolling India, has often been left red-faced when netizens point out his gaffes or ridicule him for his poor English skills.

Ghafoor couild rightly be crowned as the brand ambassador of burnol ointment, used to heal burns, for using trucks full of it in his posts aiming at India.

On one occasion, Ghafoor had offered burnol to political commentator Gul Bukhari, who had objected to the tone of Prime Minister Imran Khan’s speech in the UN General Assembly.

This medicine is only for burns and not for other discomfort or disease. Symptoms indicate requirement of consulting a psychiatrist or even a good surgeon. pic.twitter.com/vKszesQg1J

Ghafoor often verbally attacks India with its cosmic missile of “Tea is fantastic” jibe, after Indian Airforce Wing Commander Abhinandan Varthaman was held captive by the Pakistani army for a brief time during a 26 February, 2019, airstrike in Pakistan’s Balakot. A video was released by the Pakistani army of Varthaman praising Pakistani tea, saying “Tea is Fantastic”. The video went viral on social media, especially in Pakistan.

The jibe and video were often used by Ghafoor to taunt India on various occasions.

Language is a barrier when you are not speaking, or being paid to write, in your native tongue, but consistent spelling errors, particularly by those holding positions of responsibility as media workers or spokespersons, instantly become ridicule-worthy meme-content.

Ghafoor tweeted an open appeal to trolls when he misspelled the word 'vein' in the term 'jugular vein' as 'vain' while quoting then-Army Chief Qamar Javed Bajwa's speech on the situation in Indian-administered Kashmir.

In his most recent spelling error, Ghafoor was mauled by a handful of Twitter users for misspelling the name of Bollywood actress Deepika Padukone as “Deepika Padukon” while praising her stand on student agitation in the Premier Jawaharlal Nehru University. The tweet was later deleted but screenshots made sure that the trolling went on apace.