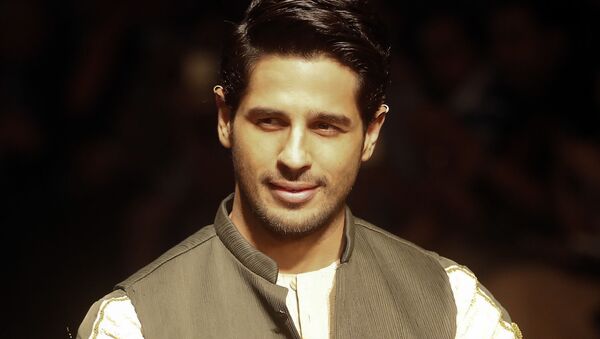 © AP Photo / Rajanish Kakade
Subscribe
International
India
Africa
New Delhi (Sputnik): Bollywood actor Sidharth Malhotra turned 35 on Thursday and at an age when most of his contemporaries were trying to stick to one film genre, he has tried varied roles in movies like “Ek Villain”, “Brothers”, “Ittefaq” and  “Marjaavaan”.

The actor is once again set to mesmerize audiences with his on-screen portrayal of the hero of the India-Pakistan conflict in Kargil in 1999, Captain Vikram Batra, in filmmaker Karan Johar’s next production “Shershaah”.

Captain Batra was posthumously awarded the Param Vir Chakra, India’s highest military decoration, for his courage during the conflict. He was martyred at the young age of 24.

On his birthday, the actor revealed the first posters of the film, and it's hard to take your eyes off his intense glare and zeal in the poster.

Sidharth captioned the image as, “An absolute honour to be able to paint the big screen with shades of bravery and sacrifice. Paying an ode to the journey of Captain Vikram Batra (PVC) and bringing the UNTOLD TRUE STORY with #Shershaah. Releasing 3rd July, 2020.”

An absolute honor to be able to paint the big screen with the shades of bravery & sacrifice.
Paying an ode to the journey of Captain Vikram Batra (PVC) and bringing the UNTOLD TRUE STORY with #Shershaah. Releasing 3rd July, 2020.@Advani_Kiara @vishnu_dir @karanjohar pic.twitter.com/RJ4qj0sNPQ

​In September, the actor shared the photos from his shooting locations and shared how happy he was to be at the place.

These are recent pictures of our shoot location post shoot here in #Kargil .Have always made sure that because of us the environment doesn't get polluted. Mother earth is equally precious to me 😊 ✌️ #Respect #MotherNature https://t.co/2AhaklRigh

Going through his Instagram profile, one would find how grateful Sidharth is for the project that is very close to his heart.

In the post, he shared a small video of Batra and captioned it by saying, “the Valour of Shershaah made him immortal. Happy birthday Shershaah, respect and salute to Captain Vikram Batra. Jai Hind.”