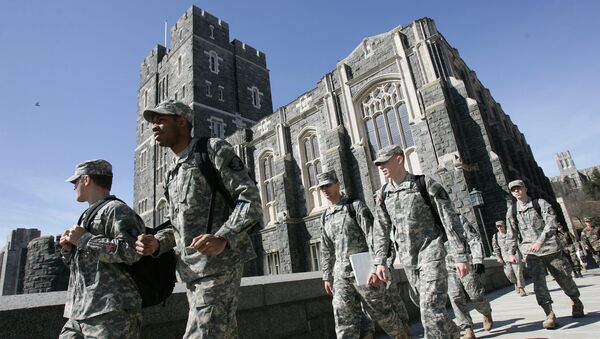 A cadet from the prestigious West Point military academy decided to find his other half in a peculiar and not really romantic way. The young man apparently used such qualities as candor, directness and non-hesitancy, that are natural for a good soldier in a private battle for settling his personal life.

The prospective American serviceman apparently also has some good organizational and entrepreneur skills, an alleged detail in his profile that enabled him to engage public effort in a bid to help him find his true love.

The West Point cadet went online and asked for donations on a GoFundMe page to help him appoint a perfect tryst with a widely popular lady among a circle of connoisseurs of her talents.

"Help Me Bring Diamond Foxxx To YWW", with militarist precision, the cadet entitled his special mission on melting the heart of the famous adult movie star.

Notably, the soul cry of the young soldier was heard by the actress, who arguably has no lack of male attention.

"Diamond Foxxx agreed to go to Y dubs with me if I can pay for her plane ticket and hotel room. Problem is I'm on the yuk payroll and I have no money. Please help a young boy's dream come true", the since-deleted page said, cited by the Task&Purpose media outlet.

The cadet's page reportedly raised $370 before it was deleted.

According to the media outlet, the US Military Academy Public Affairs Office said that "the cadet promptly removed the page from the site after consulting with his peers".

"Federal law prohibits members of the military from using their official positions for personal gain [...] This prohibition extends to using or appearing to use ones military status to solicit gifts of money", the statement said, cited by Task&Purpose.

Ex-Hijab Porn Star Mia Khalifa Knows How to Wish Fans a Merry Christmas
The naughty sophomore himself said in a message seen by Task&Purpose that "some cadets and officers were discomforted by the effort to bring Diamond Foxxx to YWW, so I was advised by those with much higher rank than me to discontinue the campaign and inform the actress that I can no longer bring her", adding that he could face punishment for his lustful impulse: "This is a measure to protect the values of the West Point community, as well as keep me from walking 3 billion hours (which could be inevitable as of now.)".

AP managed to get in touch with Foxxx, who told reporters that the cadet was "very polite and respectful" and that she was "honored" by the invitation. She reportedly promised him she would attend the event if he covered the bill for her accommodation and a flight ticket from Fort Lauderdale, Florida, adding, in a caring way, that "my only concern is that he doesn't get in trouble".