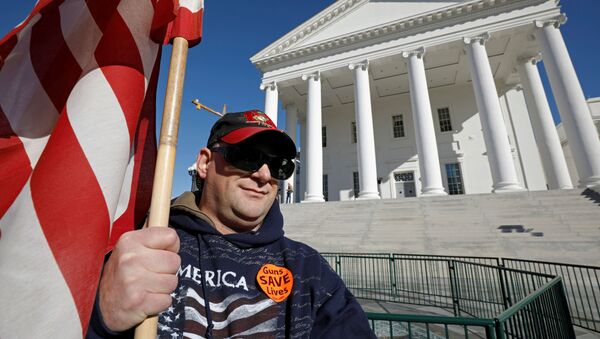 WASHINGTON (Sputnik) - The US state of Virginia is temporarily banning weapons in its capitol of Richmond due to credible intelligence suggesting threats of violence at an upcoming demonstration, Governor Ralph Northam's office said in a press release.

"Governor Ralph Northam today declared a state of emergency in advance of expected demonstrations on Capitol Square on Monday, January 20, 2020," the governor's office said in the release on Wednesday. "The Governor’s declaration prohibits all weapons, including firearms, from Capitol grounds."

Virginia law enforcement agencies have received intelligence about credible threats of violence surrounding Monday's planned demonstration, which is expected to draw the participation of white nationalists and out-of-state militia groups, the release said.

This intelligence suggests militia groups and hate groups, some from out of state, plan to come to the Capitol to disrupt our democratic process with acts of violence.

The Virginia Citizens Defence League has organized the pro-gun rights rally for Monday to protest gun control measures that the Democratic-controlled legislature has proposed.

The capitol's weapons ban will last from Friday evening to Tuesday evening, the release said.

Governor Northham said in a statement via Twitter on Wednesday that the threats of violence are similar to the extremist rhetoric seen in major incidents such as occurred in the Virginia city of Charlottesville in 2017.