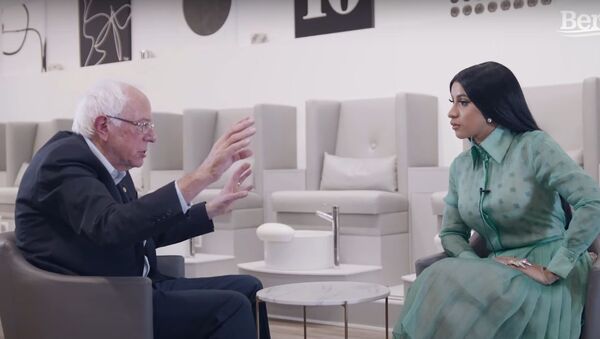 Svetlana Ekimenko
All materialsWrite to the author
Rapper celebrity Cardi B seemed to be getting increasingly serious about entering politics, as she shared her thoughts in a series of tweets on Sunday, adding that she “loves government” even though she doesn’t always agree with “the Government.”

Vermont Sen. Bernie Sanders has said it would be great if rapper Cardi B were to run for political office, as he appeared in a TMZ interview published Tuesday, 14 January.

"Cardi B is deeply concerned about what's happening in the country. She knows what it's like to live in poverty and struggle, and it would be great for her to bring that experience to politics" said Sanders.

Cardi B has been showing an interest in politics for a while now, as on Sunday, the rapper floated the idea of seeking office:

​Some netizens were nonplussed over the statement made by the White House contender.

I didn’t know being poor and struggling was considered political experience. Hmmm, I should be president in that case. pic.twitter.com/wSvpmuKkXP

​Others were not at all amused at the “endorsement”.

There are a LOT of people who knows what it's like to live in poverty.

Please someone put that crazy old man in a retirement home.

Ya just lost me Bernie.

Other netizens kept their cool, seeing politics “for what they are”.

Politics at its greatest. He knows there’s about a 0.005% chance of her winning but it sure makes him look cool supporting her...to the crowd that votes based on what’s cool.

​Supporters of Bernie Sanders, however, found nothing amiss with his statements.

.. #CNNistrash.. they're trying hard to bring Bernie Sanders down 🤪🤪🤪 but our movement is so strong 💪@SenSanders is gonna Win so deal with it 🤪#bernie2020✌️✌️✌️

​Senator Bernie Sanders and Cardi B have long been fans of one another, teaming up in July last year to film a 2020 presidential campaign video meant to appeal to young voters, where the focus was on cancellation of student debt, the climate crisis and raising the minimum wage.

The video was filmed at the TEN Nail Bar, a salon owned by two black women, and was the first collaboration between the duo.

Not me, US. Thank you Senator Bernie Sanders for sitting with me and sharing your plans on how you will change this country. A couple of weeks ago I asked my followers if you had the opportunity to have a question answered by a democratic candidate what would it be ? I got a lot of submission and selected the most popular questions to get answered. Stay tuned to see how he will fight for economic, racial, and social justice for all. Together, let’s build a movement of young people to transform this country.LETS LEARN OUR CANDIDATES!

"Thank you Senator Bernie Sanders for sitting with me and sharing your plans on how you will change this country," the rapper wrote

Before entering the nail bar where the video was filmed, Sanders told CNN what it meant to have Cardi B's support.

"What it means is, what Cardi B does, not only is she an enormously popular entertainer, what she is doing is speaking to young people about the important issues that are on their minds and I applaud that very much" Sanders told CNN in July.

In December, Cardi B gave an interview for Vogue where besides other issues she touched upon why she supported Sanders.

"People are not perfect, but he has the perfect intentions. He naturally cares about minorities. He actually cares about people getting Medicare because he knows they can't afford it. I don't feel like he's just saying these things 'cause he want the vote," said Cardi B.