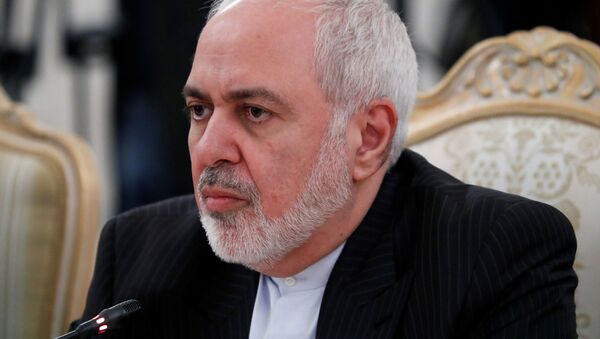 New Delhi (Sputnik): Hostilities between Iran and the US reached a flashpoint in early January when senior Iranian general Qasem Soleimani was killed in a drone strike at Baghdad airport on President Donald Trump’s orders. Iran retaliated with missile attacks on bases hosting American forces in Iraq.

During an interactive session of the Raisina Dialogue – 2020 in New Delhi on Wednesday, Iranian Foreign Minister Javad Zarif cautioned the US to think very carefully about what it was doing in the Middle East and warned Washington to avoid committing one mistake after another.

Zarif elaborated on the recent developments in Iran and its extended neighbourhood following Quds Force chief Major General Qasem Soleimani’s assassination by the US, and said it reflected a very serious problem in America's thinking on the region.

The Iranian minister added that the US did not look at the prevailing situation in the Middle East from the perspective of the people of that region and described the leadership in Washington as both “ignorant and arrogant”, and added that when both of these qualities combine, “it becomes a disaster, particularly if you have a lot of power.”

Zarif said that not only in Iran, but even in India thousands came out to protest the killing of Soleimani.

“That tells you that you can’t bring  nine million people on to the streets with force; it does not happen, (but) you certainly cannot bring people – 8,000 people in Delhi, 9,000 people in Mumbai; you cannot bring them out by any proxy measure,” Zarif said.

Iran Rejects 'Trump Deal' Proposed by UK PM Johnson as a Replacement for JCPOA
Responding to repeated US claims  that Iran’s military leadership has been operating across the Middle East through proxies, Zarif said: “The US talks about proxies. Do we have proxies in India?”

India maintained that it would like the situation to de-escalate and has been in touch with Iran and other key players in the region, including the United Arab Emirates, Oman and Qatar.

Soleimani was killed in a US drone strike at the Baghdad International Airport on 3 January that was ordered by US President Donald Trump. The attack, which was blasted by Tehran as an act of terror, prompted Iran to retaliate a few days later by launching dozens of missiles at military bases housing US troops in Iraq. There were no casualties in the strikes, which the Iranian side described as "legitimate self-defence".