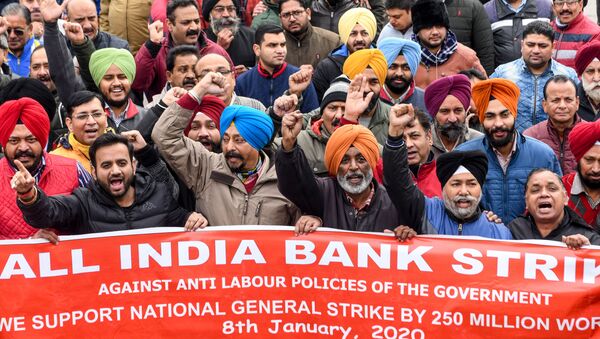 New Delhi (Sputnik): A wage settlement for over 100,000 bank employees and officers has been stuck for two years due to serious differences between management and unions.

Bank unions, under the United Forum of Bank Unions, have called for a two-day nationwide strike on 31 January and 1 February after talks over wages with the Indian Banks' Association (IBA) failed to make headway.

The UFBU, which represents nine trade unions, is demanding a 15% hike in wages for bank employees. The demand has been pending since November, 2017.

There were reports that after a broad agreement over the IBA's offer of a 12% increase, the talks were derailed for over a year after four officers associations wanted to include bank officers across all seven wage scales in the proposed settlement.

The UFBU is demanding at least a 15 percent hike, but the Indian Banking Association has capped the raise at 12.25 percent.

"From April 1, we have decided to go on an indefinite strike," UFBU state convenor Siddartha Khan told Indian news agency PTI. The last wage revision meeting was held on January 13.