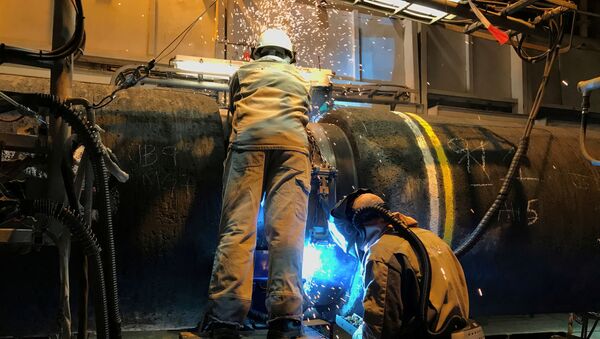 © REUTERS / Stine Jacobsen
Subscribe
The US sanctions have so far managed to slow down the construction of the Russian Nord Stream 2 gas pipeline, although Ukraine and Russia have reached a new gas transit agreement. Meanwhile, another new Russian gas pipeline, TurkStream, has been launched.

Sputnik discussed the situation with Roland Götz, a German expert on Eastern Europe and Russia, who specialises in studying their energy and resources.

Sputnik: US sanctions have delayed the construction of Nord Stream 2. What does this mean for the project?

Roland Götz: The US sanctions, which were incorporated into a defence budget law, turned out to be quite surprising for Gazprom. After all, it would have taken a few more days to complete Nord Stream 2. Due to the sanctions, the completion date has now been postponed for several months, if not a whole year.

This is largely due to the fact that the pipe-laying vessel of the Swiss company involved in the project had to stop working due to the sanctions. The question now is how quickly the Russian ship Akademik Chersky, which is currently in Nakhodka (in the Sea of ​​Japan), can be restructured and used. Then it still has to be transported to the Baltic Sea. And even then it will lay pipes, if at all, more slowly than the Swiss ship.

In this context, I would also like to point out again that the actual delay in the project was caused by Denmark’s refusal to issue a building permit around Bornholm on time. So these sanctions only came into play because Denmark had delayed the implementation of the project for several months.

Sputnik: How much will the cost of the project increase due to construction delays?

Roland Götz: I don’t know. But it should be a few tens, if not hundreds, of millions. On the one hand, there are the costs of providing the Russian pipe-laying ship; on the other hand, of course, there’re losses from the delay of gas deliveries through Nord Stream 2. The cost will be borne primarily by the owners of Gazprom.

Sputnik: There’s much talk about this Swiss pipe-laying company. What about other Western companies involved in the Nord Stream 2 project, which agreed neither to finance the project nor to build or maintain the gas pipeline?

Roland Götz: There’s no talk about them. The sanctions specifically target pipe-laying ships and all related work. Work on land and in shallow coastal waters is not affected by sanctions. So, it is essentially about the world’s largest pipe-laying ship, (owned by) that Swiss company. They have reacted very quickly and recalled their ship.

Sputnik: Some still criticise Trump, and maintain that the sanctions were too late and too lenient. What’s your take on that?

Roland Götz: Actually, it is not even about Trump, although he did speak about this – the actual initiative came from Congress. And here we are talking not only about Nord Stream 2 but about general criticism of Russia. The US, first of all, is talking about Russian meddling in the American elections, as well as about its actions in Ukraine. Against this background, it is clear that Congress almost unanimously voted for the sanctions.

Sputnik: Are these sanctions really tough?

Roland Götz: In any case, they were introduced very cleverly. They don’t cost the United States anything – it is Gazprom that bears all the expenses. To some extent, Germany was affected: one can talk about rather gross interference in European and, first of all, German energy affairs, which Germany and even the European Commission were opposed to. These sanctions are quite painful because they affect the most difficult part of the Nord Stream-2 project – offshore construction.

Sputnik: To justify the sanctions, the United States claims to seek to prevent Europe’s excessive dependence on Russian gas, although one may wonder why they would care about that. The second reason, as they say, is their concern about Ukraine, which could lose its significance as a gas transit country because of Nord Stream 2. But the second argument is no longer valid, since Russia and Ukraine have already signed a new transit agreement, right?

Roland Götz: From the point of view of the US Congress, this argument is quite valid, since the wording of the sanctions says that they can be lifted only if the transit of Russian gas through Ukraine is reduced by no more than 25%. At the moment, 80-90 billion cubic meters of gas is transported through Ukraine.

Under the new agreement, transit will be reduced by 20% in 2020, and by another 20% in 2021. So this condition of Congress hasn’t actually been met. Something else to consider is that such US sanctions generally remain valid for a very long time – think of the sanctions against Cuba introduced several decades ago. It is therefore unlikely that Congress will lift these sanctions in the foreseeable future. The only way would be for President Trump to lift them for foreign policy reasons.

Sputnik: The sanctions law also mentions TurkStream, another Russian gas pipeline, which is, however, already finished. In this context, is it likely that some pitfalls may occur for the section leading to Europe?

Roland Götz: No, since the sanctions concern the construction of pipelines on the high seas, and the TurkStream is already finished. But if it comes to expanding it, this project will be affected by US sanctions, since they will be valid for at least ten years, and they concern any Russian deep-sea pipelines in the Baltic and Black Seas.

Roland Götz: The sanctions affect companies; and they don’t depend on state policies. And if these companies fear being hit by US economic sanctions, they will refuse to work. So the EU states are basically powerless to do anything about it. The German Chancellor has already said that there would be no counter-sanctions. They would be completely ineffective against the United States. Besides, this would in no way help complete the construction of Nord Stream 2.

000000
Popular comments
It does remind of the shitty deals that England gave its Colony America. Maybe we need to tax some products of our own such as operating systems and network gear. US Gas should not be used because it is environmentally more damaging than Russian Gas because of the different methods of extraction and transport. So if US Gas, then with a carbon tax please to level the playing field.