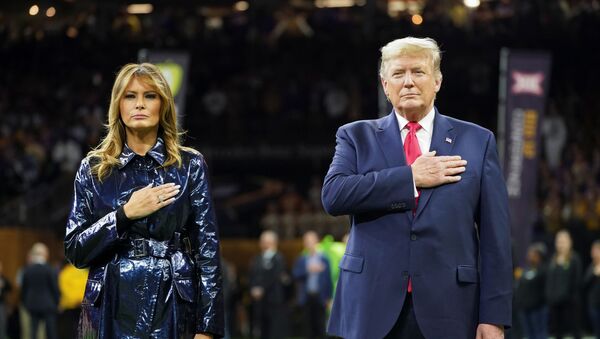 © REUTERS / KEVIN LAMARQUE
Subscribe
Svetlana Ekimenko
All materialsWrite to the author
On Monday US President Donald Trump and First Lady Melania Trump attended the start of the College Football Playoff National Championship in New Orleans at a game between Louisiana State University and Clemson, to a roaring greeting from the crowds.

US President Donald Trump and first lady Melania Trump were greeted by fans at the game between Louisiana State University and Clemson University of South Carolina in the Superdome on Monday night as they attended the 2020 College Football Playoff national championship game in New Orleans.

“It’ll be a great game. It’ll be something that a lot of people want to see,” said Trump, leaving the White House.

The president, 73, and the First Lady, 49, walked onto the field for the singing of the National Anthem and were cheered by both teams.

Just as they took up their positions, Donald Trump placed his hand around his wife’s, only to have her jerk it away "forcefully" in an incident that fans swooped in on at once. Many referred to it as yet another incident of what’s been dubbed “HandGate.”

Not that I have any sympathy for her, but same, Melania. Same.pic.twitter.com/7cUvrUU1nL

I watched it live. It very much happened.

I watched it to and you're right! She did snatch her hand away from him!

They have no live for each other he is her ATM she his arm candy! Nothing more!

They probably don’t speak when they not in public lol RT @SamZComedy: Yo trump threw Melania’s hand so hard 😂😂 wth is wrong with him? #LSUvsCLEM pic.twitter.com/dC7NWWvqBF

Looks like someone is a little stressed out about IMPEACHMENT this evening. Here's Trump flicking away the hand of Melania. What a cute couple... If you think "angry dictator" is cute.pic.twitter.com/x6e3XnKRgG

I saw it live. She snatched that hand back & trump did the patented “let me adjust my tie & jacket thing & pretend nothing happened” move.

​Others online tended to think it was the other way around, and it was Donald Trump who had been pulling away.

Did he push her hand or did she yank it ?

Yo trump threw Melania’s hand so hard 😂😂 wth is wrong with him? #LSUvsCLEM pic.twitter.com/RUHD4Msx1g

Did he push her hand or did she yank it ?

Bets are on that once Trump is out of office, Melania will "get her own space" and a hefty support settlement that will include a "non- disclosure" clause.

Looks like he’s the one who tossed her hand away. Imagine that.

​The sometimes awkward body language noticed between US President Donald Trump and his wife, Melania Trump, has often been a talking point on social media.

FLOTUS has seemingly repeatedly refused to hold her husband’s hand in public.

Melania deploys a strategeic & well-timed hair move to avoid the tiny hand of a perv as Trump arrives in Rome. pic.twitter.com/wIcWLspRh9

​While at times she offers a brief hand hold, before letting go, or is believed to employ tactics like a hair sweep to avoid the encounter, on other occasions the First Lady was spied swatting his hand away like on the couple’s state trip to Tel Aviv in 2017.

​The incidents have, needless to say, often gone viral.

000000
Popular comments
If ever there was a marriage based on Loathing that's it, she can't stand him!