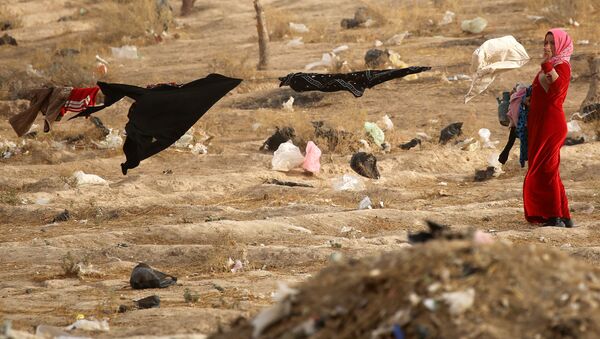 The woman has been living in Syria since 2013, having changed several jihadi spouses in the process. In October 2019, the woman was charged with participating in the terrorist organisations Jabhat al-Nusra* and Daesh*.

Norwegian authorities have decided to bring  a 29-year-old Pakistani-Norwegian woman with two children back home from the Al-Hol camp in northern Syria, national broadcaster NRK reported.

“This is being done on a humanitarian basis, because we fear there that one of the children, [a five-year-old], is sick," Foreign Minister Ine Eriksen Søreide of the Conservative Party said at a press conference.

Søreide emphasised that the extraordinary circumstances had led to the woman and her two children being brought home despite the government's policy not to return adults associated with Daesh back to Norway. She described the deviation as an “extremely demanding job”.

“The government does not want to help return adults who have joined Daesh,” she assured, stressing that it was “necessary” to bring home the sick child's sister and mother as well.

She also made it clear that Norwegian nationals who have returned to Norway after joining Daesh in Syria shall be prosecuted and referred to the Police Security Service (PST) for further information.

The woman reportedly travelled to Syria in 2013. There, she married Norwegian jihadist Bastian Vasquez, who was already known for his extreme attitudes. When Vasquez was killed, the woman re-married.

The 29-year-old woman has subsequently spent an extended period of time in the Kurdish-controlled Al-Hol camp in northern Syria with her two children. In October 2019, she was charged with participating in the terrorist organisations Jahbat al-Nusra and Daesh. Her transfer has been confirmed by several parts, including Abdulkarim Omar, the head of foreign affairs in the de facto Kurdish-administered part of Syria.

According to a Syrian doctor, the sick boy probably suffers from cystic fibrosis, but the diagnosis has not been confirmed by any other doctor.

The decision caused a rift within the Norwegian government. Oil and Energy Minister Sylvi Listhaug of the right-wing Progress Party suggested that the mother “cynically used her child”, voicing neither sympathy nor forgiveness for the Daesh widow.

“The Progress Party has been willing to bring back the sick child. But our condition has been that it should happen without his mother following suit. The child in question could have received help earlier. Unfortunately, the mother has cynically used her child to get herself back to Norway,” Listhaug stressed.

Progress Party Jon Helgheim called the mother “irresponsible” and accused her of “putting her own needs ahead of her children's”. He also said that the Progress Party opposes anyone having joined the terrorist cause to return to Norway.

On the other hand, the Liberals and the Christian Democrats rejoiced.

Liberal MP Abid Raja called the decision “gratifying”, lauded Søreide for having taken the right decision, and stressed that saving lives must always be the single most important thing for Norway. He also stressed that the mother must be prosecuted if she has done something wrong.

“We Liberals are happy and relieved that these innocent and vulnerable children and their mother are now safely on their way home,” Liberals leader Trine Skei Grande said.

At least 11 women travelled from Norway to Syria. So far, Norway has reclaimed five “Daesh orphans”.

* Jabhat al-Nusra and Daesh (ISIS/ISIL/IS) are terrorist organisations banned in Russia and other countries.