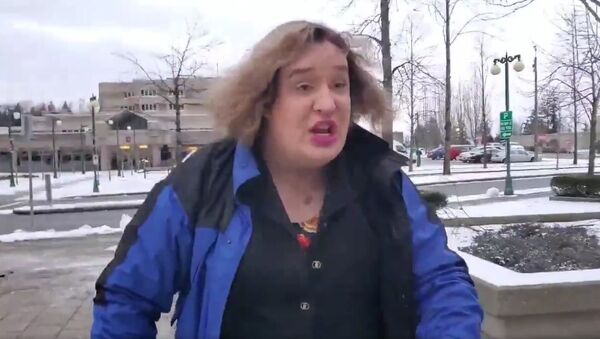 Jesssica Yaniv, a transgender woman based in the Canadian province of British Columbia, was charged with possession of a prohibited weapon in August after brandishing a stun gun to intimidate *her* counterpart.

Trans activist Jessica Yaniv has a record of violent interactions with reporters, but this one may lead to actual charges being levelled against *her*.

Keean Bexte, a reporter for the right-wing website Rebel News, walked up to Yaniv with a camera as *she* was walking out of the Provincial Court of British Columbia on Monday after a hearing on charges of possessing an illegal weapon.

Yaniv followed after the journo, who said *she* punched him in the back of the head, yelling, “Get away from me!”

J. Yaniv just punched me in the back of the head. Just spoke to police. Luckily there are two security cameras directly overhead at the courthouse. I need an advil. pic.twitter.com/3hfm2CfYhq

In a follow-up statement, Bexte said he was seeking legal advice on whether there are any “options to make sure this menace sees justice”.

Yaniv’s charges stem from a livestream YouTube debate in August where the activist flashed a stun gun, demonstrating knowledge that the weapon was prohibited in Canada.

Police soon arrested Yaniv and searched the trans activist's house, where they also found the prohibited pepper spray. Yaniv is now facing six months in prison for each charge.

During recess on Monday, Yaniv also confronted The Post Millenial reporter Amy Eileen Hamm whom *she* claimed had taken *her* photographs in the women’s bathroom.

Hamm said she entered the bathroom but “quickly exited” after spotting Yaniv there. Police searched her phone and found no photos of the trans activist.

Yaniv successfully insisted on barring Bexte and another reporter from covering Monday’s hearing, so there is scarce information on what happened there. According to Hamm, Yaniv asked the court for a publication ban – similar to that enforced in the summer during the infamous “Scrotum Waxing” case – but the request was denied.

Yaniv then reportedly requested a new court date, and the hearing was re-scheduled for 10 February.

In August, Yaniv assaulted another Rebel News reporter with a cane as he was calling out the activist's well-documented obsession with teenage girls and their periods.