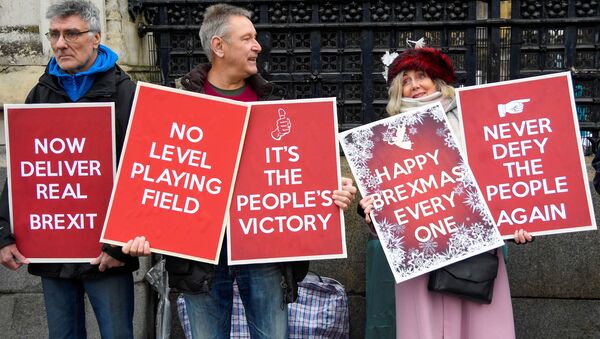 Negotiations between Westminster and Brussels are set to resume in the coming weeks, and Fox argues that lingering pro-EU sentiments harboured within the civil service could prove problematic in the long run.

And as Johnson pledged to sever ties with the bloc by the end of the year, time is most definitely of the essence.

But will the Prime Minister heed the advice of Fox? UKIP’s David Kurten gives his thoughts on the issue.

Sputnik: Does the British civil service need to be reformed?

David Kurten: The civil service does need some reform, because you’ve had these people like Olly Robbins and other people who were there, doing the negotiations, and they were really almost in charge and making the pace; the whole thing under Theresa May, where she let the civil service off the leash to be in charge of the process, meant that you didn’t have people that were democratically elected in charge and that really needs to change.

In terms of what Boris Johnson is going to do, we just don’t know. He has promised almost a hard Brexit, it’s not what I would call a clean break Brexit, where we leave on the 31st of January with no treaty, that’s what would be a proper full Brexit in my opinion, but what he’s done really, is say that he’s going to sign this new treaty, which keeps the UK in a transition period for eleven months, which is rather a perilous time coming up, to be honest.

The Conservative ministers don’t ever use the word vassalage anymore, but really we are going into a period of eleven months of vassalage, where we leave the European Commission and Parliament, but we still stay subject to the entire acquis of the EU, we have to obey all of their directives and regulations in that eleven-month period, and we stay in the single market and the customs union, so we are really not actually leaving in any effective form whatsoever until the 31st of December.

Then there’s going to be the second treaty, which is based on the political declaration and I don’t know what is going to come out of that, because the negotiations for that haven’t even started, so we really don’t know exactly what Brexit is going to be when we arrive at the 31st of December 2020.

Sputnik: Would a reversion to WTO rules be better for the UK than severing ties with Brussels with a bad trading arrangement?

David Kurten: The UK has got nothing to lose from a no-deal Brexit, we will sail off and we will be out of the control of the EU’s rules and regulatory frameworks, so we will be free to do whatever we like. It’s not just about trade, it’s about getting back our fishing waters, getting back our sovereignty, control of our laws and also our money, borders and not being subject to the common migration policy and the open borders that we have to adhere to by being part of the EU.

Sputnik: Will the USA necessarily be willing to agree on a mutually beneficial post-Brexit trade deal with the UK?

David Kurten: The way that the deal is structured, is that the UK is not allowed to pursue trade deals at the moment, until we actually go into the transition period, so that’s the understanding; that when we actually leave in name only as I would say, on the 31st of January, we can start negotiating trade deals with the United States and with other countries as well and that’s a very good thing.

We’ve got to go into any trade deal with the United States with our eyes open, we shouldn’t just accept unilaterally what’s put on the table, there’s got to be some kind of negotiation, we don’t want to end up in a situation where we have a bad deal between the UK and the US which would subject us to corporate courts and would force us to perhaps lower environmental and agricultural standards; we don’t want to do that, so we’ve got to have a trade deal which is in our benefit and our mutual interest as well.