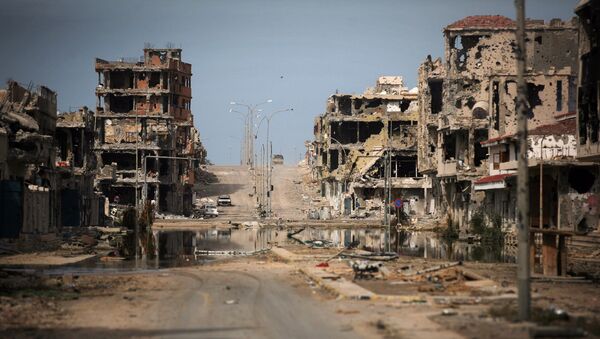 Earlier this day, the Russian Foreign Ministry confirmed that Libyan National Army (LNA) leader Field Marshal Khalifa Haftar had left Moscow without signing a ceasefire agreement with the head of the UN-backed Government of National Accord (GNA) Fayez al-Sarraj.

Commenting on the failure to reach a ceasefire agreement between Libyan Field Marshal Khalifa Haftar and the UN-backed government, Russian Foreign Minister Sergei Lavrov said that Libya's statehood had been destroyed by NATO.

"If Libya could become 'a second Syria', I believe the Libyan people will benefit from this. Unfortunately, there is no statehood in Libya so far," Lavrov said at a press conference, held after talks with Sri Lankan Foreign Minister Dinesh Gunawardena.

"The Libyan statehood was bombed by NATO in 2011, and we are still facing the consequences of this illegal, criminal escapade, the Libyan people first of all," Lavrov said.

The Russian foreign minister noted the need to urge the conflicting parties in Libya to negotiate instead of resorting to using force.

On Monday, Haftar met with Libya's internationally recognised prime minister, Fayez Sarraj in the Russian capital for talks mediated by Russia and Turkey. That day, Lavrov said that Haftar had asked for a little extra time to look at a draft ceasefire agreement between Libya’s conflicting sides.

However, early this morning, it was announced that Haftar had left Moscow without signing a deal.

On Assassination of Soleimani

According to the Russian foreign minister, the assassination of Qassem Soleimani, the head of the Islamic Revolutionary Guard Corp’s Quds Force, was the culmination of US illegal actions.

"Of course, the killing of Qasem Soleimani, an official representative of the Iranian government who was paying a visit to neighbouring Iraq, was the culmination of Washington's illegal actions. This is certainly beyond any international legal and humane framework," Lavrov said at a press conference after talks with Sri Lankan Foreign Minister Dinesh Gunawardena.

He added that Washington's policies on Iran were behind the increase in tensions in the Persian Gulf area.

"Of course, no one can be satisfied with the events in the Persian Gulf area, where tensions are increasing, and, I would say, nervousness is increasing, which affects practical steps and results in people's deaths," Lavrov said.

Tehran Plans to Take Trump to International Court for Soleimani’s Assassination – Iran’s Top Judge
Soleimani, 62, was killed in Baghdad on January 3 when the convoy he and a senior Iraqi Shia militia leader were riding in was struck by a US Reaper drone.

Donald Trump ordered the strike without seeking the approval of Congress, which is normally required in such cases.

Trump and US Secretary of State Mike Pompeo have claimed, citing undisclosed intelligence, that Soleimani was planning attacks on US embassies, creating the impression that he was posing a threat to US security.