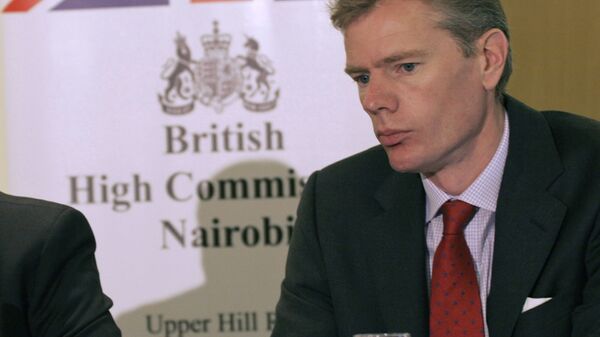 "Such people are considered personae non grata in international law, and our people and the international community expect him to be expelled from the country," Ismaili said, as quoted by Iran's ISNA news agency.

Earlier in the day, Ahmad Amir Abadi Farahani, a top Iranian parliamentarian, announced that Iran was preparing two draft resolutions on reducing diplomatic relations with the United Kingdom and that 100 lawmakers had already signed them.

Macaire was briefly detained on Saturday and accused of organizing and participating in unauthorized protests in Tehran that were sparked by the government's acknowledgment of responsibility in the fatal Ukrainian plane crash that happened earlier in the week.

On Monday, the spokesman for Iran’s government urged the UK government to not interfere with Tehran’s internal affairs and said that Macaire’s presence at the protests contradicted his ambassadorial responsibilities and duties.

On Wednesday, it was reported that the Kiev-bound Boeing of the Ukraine International Airlines had crashed near Tehran's Imam Khomeini International Airport, killing all 176 people on board. Earlier that day, Iran had attacked US bases in Iraq with missiles. On Saturday, the Iranian military admitted to unintentionally shooting down the aircraft, having confused it with a hostile cruise missile in anticipation of US retaliation.