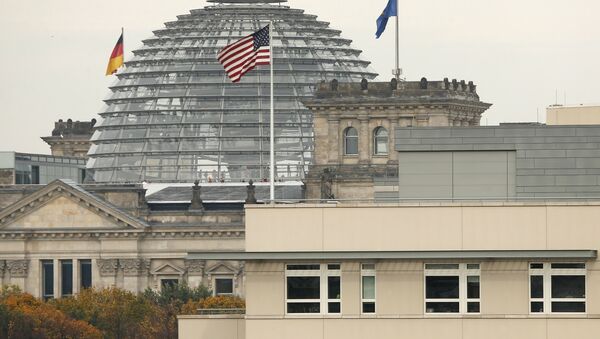 Oleg Burunov
All materialsWrite to the author
On Monday, US President Donald Trump defended his decision to assassinate high-ranking Iranian commander Qasem Soleimani; blaming the “fake news media” and their "Democratic partners" for doubting his administration's narrative over whether Soleimani's future plans to attack the US were "imminent".

The sources claimed that statements by the US Administration do not allow one to “unambiguously answer the question why the assassination of Soleimani in Iraq was necessary to avert a direct threat to the lives of American citizens”.

“It seems that a drone attack does not meet the ‘last resort’ criteria to save the lives of Americans and in this regard, it can be seen as a violation of the UN-initiated International  Covenant on Civil and Political Rights”, the sources argued.

The remarks come after President Donald Trump moved to defend his decision to authorise the assassination of Soleimani, accusing the “fake news media” of questioning the move.

“The Fake News Media and their Democrat Partners are working hard to determine whether or not the future attack by terrorist Soleimani was 'imminent' or not, & was my team in agreement. The answer to both is a strong YES., but it doesn't really matter because of his horrible past!” Trump tweeted on Monday.

US Secretary of State Mike Pompeo, for his part, said during a speech at Stanford’s Hoover Institute on Monday that Soleimani’s killing was part of a “[Washington’] bigger strategy” to deter Iran and other US rivals, including Russia and China.

“The importance of deterrence isn’t confined to Iran. In all cases, we must deter foes to defend freedom. That’s the whole point of President Trump’s work to make our military the strongest it’s ever been”, Pompeo pointed out.

US Defence Secretary Mark Esper, however, contradicted the claim on Sunday, saying that he had seen no evidence to back it up.

General Soleimani was killed on 3 January, when a US Reaper drone launched a missile at the Baghdad International Airport in a strike that was ordered by Trump and slammed by Tehran as an act of terror.

Iran retaliated against the US drone strike by attacking American forces at the Ayn Al-Asad Air Base and a facility in Erbil in Iraq with ballistic missiles. There were no casualties in the attack which Tehran claimed were conducted in self-defence and in line with the UN Charter.

Trump indicated that there would be no immediate US escalation in the conflict during his address to the nation on 8 January, when he signalled Washington’s readiness to make peace with Tehran if its leadership “changed its behaviour”. At the same time, the US President underlined that Iran would never be allowed to obtain a nuclear weapon.

000000
Popular comments
US is increasingly finding themselves alone in this rancid mess which they created. Evidence being that Germany, France and the UK are making efforts to save the Nuclear Deal of 2015, also Russia and China do not support the assassination despite trump groveling to them in his speech last week asking those countries to discard Iran and join his cause.
Foxylady
14 January 2020, 18:34 GMT3
000000
Since its inception The USA Has Been At War 222 Out of its 239 Years -- Notice the USA - was originally founded by criminals, gang rapists and mass murderers fleeing Britain. All this scum has dutifully continued its mass murderous rampage on this planet by holocausting the Native Americans. Then they proceeded massacring millions around the world in countless USA-created wars. If any sane & sober US President came to power, then the satanic scum gang made up from the most influential cult members (MIC) in the USA made sure that normal president was assassinated. Then they attracted more & more criminals like the WW2 Nazis, because USA is a Safe Haven for the lowest of scum Liars & mass murderers. Their dearest Uncle is SATAN the Father of Lies.