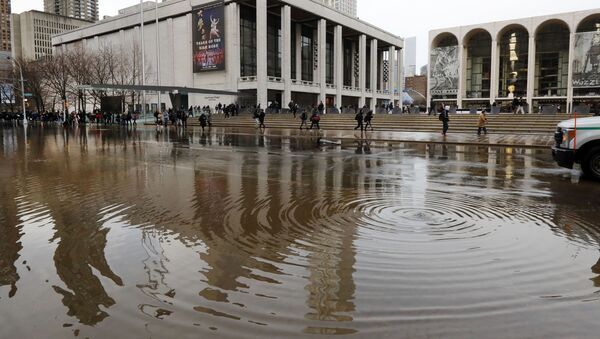 The water main break led to flooding near Broadway and West 62nd streets. According to the Fire Department of New York (FDNY), the water flooded several blocks, parking garages, subways and even some basements. The water was several inches deep in certain areas and led to delays on the 1, 2 and 3 subway lines, according to the New York Post.

​“It’s crazy, you need a boat or something to get through. I didn’t end wear boots today and now we got all this … It’s dirty, too. The water’s brown. It better not be sewer water,” local commuter Michael Romero, 27, told the Post, describing the area around Broadway street.

It took the FDNY about three hours to curb the flooding because the water main’s shut-off valves are located in manholes, which were difficult to access due to the flooding.

​“We’re going to have Broadway southbound, the west side of Broadway closed down probably for a few days as we open up the street and make repairs,”  Vincent Sapienza, commissioner of New York City’s Department of Environmental Protection, is quoted as telling the New York Post. “While this water main is shut off, we’ll have water from other areas.”

Sapienza also noted that some residents may notice discolored water from harmless debris coming out of their faucets due to “shaking of the pipes,” but that letting the water run for a few minutes should restore it to normal. Workers will also have to open up the pavement to repair the ruptured main.

“It will likely take a few days to actually have that work done and the street restored,” Sapienza said.