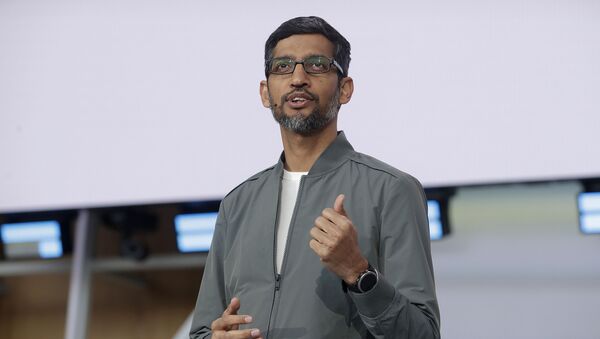 New Delhi (Sputnik): Dangerous cyber-threats loom over the 3.4 billion internet users around the world; security experts have started highlighting vulnerabilities in everyday devices that could expose users to the risk of malicious attacks and the unlawful collection of personal data.

Over 50 international privacy groups have reached out to Sundar Pichai, the Indian CEO of US-based search engine giant Google and its parent company Alphabet, demanding a way to handle the issue of pre-installed bloatware on Android devices, media reported on Monday.

Android is a customisable operating system (OS) for smartphones and smartwatches that has over 2.5 billion global users; it was developed and is owned by Google. When Android device manufacturers run the Android OS on their devices, they often add extra apps which cannot be deleted.

These pre-installed apps don't come with "stock Android" but are added later by phone companies and are called “Bloatware”; critics claim their real purpose is to collect personal data without the consent or knowledge of users.

In an open letter addressed to Pichai, security researches from groups including American Civil Liberties Union (ACLU) and England-based Privacy International have highlighted that pre-installed bloatware could be coming with custom permissions that allow them to violate the security checks of Android's security provisions.

The letter also cited research reports proving that over 90 percent of the pre-installed apps that come with Android devices do not appear in Google Play Store – making them even more suspicious.

As a suggestion to combat the issue, the letter seeks Pichai’s approval to let Android users un-install the pre-installed bloatware on their devices permanently.

In addition, the letter also requested that Pichai prohibit handset-makers which added bloatware to their Android devices from getting certified by Google.

As of now, Google has not replied to the letter.

In India, where the adaption rate of newer technologies is among the highest in the world, over 500 million people own smartphones and digital assistants.

As nations around the world are plagued with concerns over the security of internal data, India is moving quickly to draft a road-map to establish a firewall splitting public from private or sensitive data, and require that critical data be stored within the country. It's aimed to safeguard private information from misuse.

Earlier in December, Prime Minister Narendra Modi's cabinet gave its go-ahead to the "Personal Data Protection Bill, 2019" that would identify which data can be classified as personal, sensitive or critical, despite strong opposition from the US.

The Indian government is also pushing the idea of mandating that foreign companies operating in India store data collected from the citizens of the country within the nation itself.