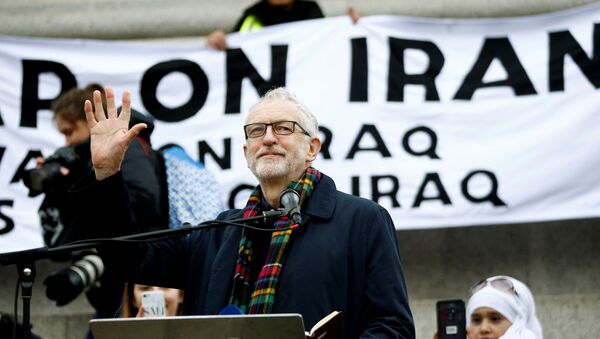 Ahead of the December general election in the UK, local Jewish leaders raised their concerns about the perceived prejudices of Labour leader Jeremy Corbyn and members of his party. Corbyn categorically rejected accusations of that the party has failed to handle the issue.

A Labour-affiliated group has accused the Israeli government of using anti-Semitism accusations as a weapon against Jeremy Corbyn, The Telegraph reports.

The newspaper says it has seen a report by Charles James, secretary of Labour International, the 3,500-strong organisation for party members living outside of the UK.

The paper, reportedly titled “General Election Part Two: Why didn’t we win?” floats the idea that “the row about anti-Semitism has been stoked by the government of Israel and Its helpers in the UK”.

James is quoted as accusing the Israeli government of “putting significant efforts and finances into influencing British politics” in order to “prevent the election of a Labour government that will recognise a Palestinian state”.

Corbyn has pledged repeatedly that he would immediately recognise a Palestinian state upon being elected and had reportedly endorsed a document accusing the State of Israel of carrying out a genocide against the Palestinians.

To lend credence to his claims, James cited a 2017 Al Jazeera investigation into the activities of pro-Israel lobbying groups in the UK.

Another argument against the existence of anti-Semitism within the Labour’s ranks, in his opinion, was the fact that Ed and David Miliband, who are both Jewish, took part in the party’s leadership contest in 2010 (Ed Miliband went on to win that race).

At the same time, the report admitted that there had been a Holocaust denier within Labour International who was suspended after “clear evidence” of his prejudice was uncovered.

Why is Labour accused of anti-Semitism?

Jeremy Corbyn has faced accusations of being an anti-Semite himself and allowing the sentiment to be rife within his party since he became Labour leader in 2015.

Claims related to Corbyn personally refer to his backing to a street artist whose mural, titled ‘Freedom for Humanity’ and featuring several Jewish bankers among the ruling class elite, was scrubbed off a wall in east London in 2012 following complaints by residents.

It has also been reported that Corbyn had been active in pro-Palestinian Facebook groups whose members posted anti-Semitic comments. He admitted to having been a member of one such group, Palestine Live, in the past but denied ever seeing abusive messages there.

Jewish campaigners have also accused the outgoing Labour leader for not doing enough to tackle anti-Semites in his own party; in one of such instances, he was criticised for failing to fully incorporate the International Holocaust Remembrance Alliance's definition of anti-Semitism into the Labour’s code of conduct. The party later adopted the full wording.

Allegations resurface during the election race

There was an outpouring of anti-Semitism accusations ahead of the UK general election in the fall of 2019, when Corbyn still entertained a realistic chance of winning. At the time, several Jewish groups and leaders, including the Jewish Labour Movement and Britain’s Chief Rabbi Ephraim Mirvis, warned voters that Corbyn was either engaging in anti-Semitism or tolerating it.

The pressure came from outside of the UK as well: the Los Angeles-based Simon Wiesenthal Center, for instance, named Corbyn as the top anti-Semite of 2019, even above the gunman who opened fire in a California synagogue in April.

Some Jewish groups, like the Jewish Voice or the United European Jews, have nevertheless supported the besieged Labor leader. The latter, for instance, dismissed Chief Rabbi Mirvis’ accusations and suggested that they were driven by “a political and ideological agenda”.

Corbyn himself refused to apologise for alleged anti-Semitism in his party and vehemently defended his record on tackling the issue, promising that he would form “the most anti-racist government” if he came to power. Nevertheless, he saw his party suffer its worst defeat since 1935 and promised to step down before the next poll.