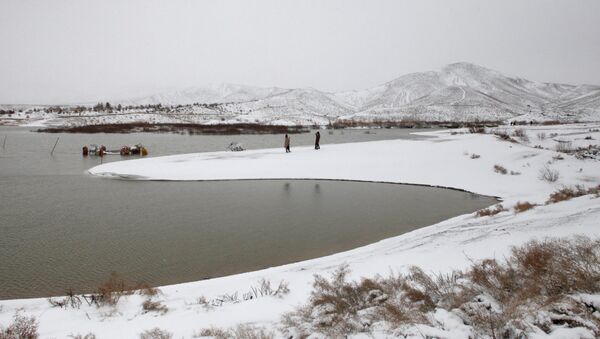 © REUTERS / NASEER AHMED
Subscribe
New Delhi (Sputnik): While heavy snowfall in Pakistan’s Balochistan province wreaked havoc and claimed several lives, including men, women, and children, others there and in neighbouring India enjoyed the snowy weather, which has turned mountainous regions into a literal winter wonderland.

An emergency has been declared by Pakistan’s disaster management authority after excessive snow and a downpour claimed lives, causing roofs to collapse, Geo TV of Pakistan reports.

​According to the Pakistan Meteorological Department, snowfall in Balochistan’s capital city of Quetta has broken a 20-year-old record following three- to four feet of snow. Highways had to be closed and air traffic was halted, disconnecting Balochistan from the rest of the world.

The continuous snow has covered provincial capital city of Quetta in a thick sheet of ice, leading to the collapse of a large number of mud houses.

While the weather continues to wreak havoc on the daily life of peoplein the affected areas, some took to social media to share their winter view of Quetta, the largest city in Balochistan.

​Pictures show cars, houses, and roads all covered in a blanket of snow as people enjoy the mesmerising surroundings.

India, to the east of Pakistan, also witnessed fresh snow in its mountainous areas of Kashmir, Himachal Pradesh and Uttrakhand.

Tourists from the plains and cities have thronged to hill stations to witness their first snowfall of 2020.

A cold wave continues to grip the national capital Delhi, which has witnessed one of its coldest winters, as the temperature dropped to a record-breaking 2.4 degrees Celsius this time.

Kashmir valley woke up to a wide carpet of heavy Snow