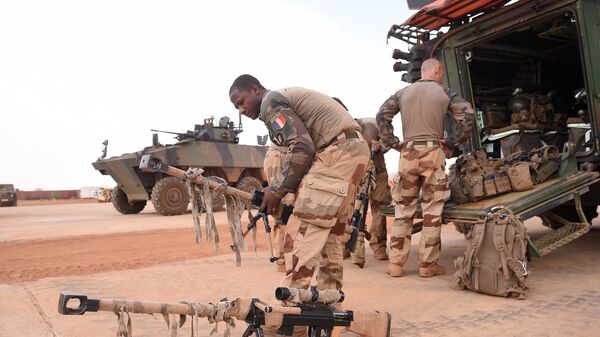 © REUTERS / Christophe Petit Tesson/pool
Subscribe
French President Emmanuel Macron and leaders of the Sahel G5 countries - Burkina Faso, Chad, Mali, Mauritania and Niger - gathered on Monday for a summit in the southwestern French city of Pau. The leaders discussed the French military presence in the Sahel region and the ongoing fight against terrorist organizations.

Macron announced on Monday that Paris would send an additional 220 troops to the Greater Sahara region, in a bid to fight an Islamist insurgency.

"We have no choice. We need results", Macron said after the summit, cited by Reuters. "I have decided to engage additional combat capabilities, 220 soldiers will reinforce Barkhane's troops", Macron stressed.

France currently deploys some 4,500 troops in the region, according to the media report.

In a joint statement, the six leaders said they would focus their efforts against Islamist militants in the region and urged Washington to continue its logistical support of their forces.

In August 2014, Operation Barkhane was launched by France, Mali, Burkina Faso and a number of other regional countries, to combat various militant groups active in the Sahel region in Africa.

Last year, militants attacked an army camp in western Niger, near the Malian border, leaving at least 70 soldiers killed, with 30 others missing. The attack occurred in the area of the ​​Inates military camp, with attackers reportedly surrounding the camp in small groups of 10. Responsibility for the attack was claimed by the Daesh terrorist group.

The attack was one of the largest in scale and resulting casualties in the history of modern day Nigeria.

Macron also said Monday that a possible Washington's withdrawal from the region could become an issue for Paris, adding that he was confident he could convince US President Donald Trump that the fight against militants in West Africa was vital.

"If the Americans were to decide to leave Africa it would be really bad news for us [...] I hope to be able to convince President Trump that the fight against terrorism also plays out in this region", Macron said after the summit, cited by Reuters.

The Sahel region has been in political turmoil since 2012, when an ethnic Tuareg separatist uprising in Mali was joined by Islamist extremist groups who then took over several cities in the desert. The insurgency has since spread across Mali's borders, into neighboring Burkina Faso and Niger.