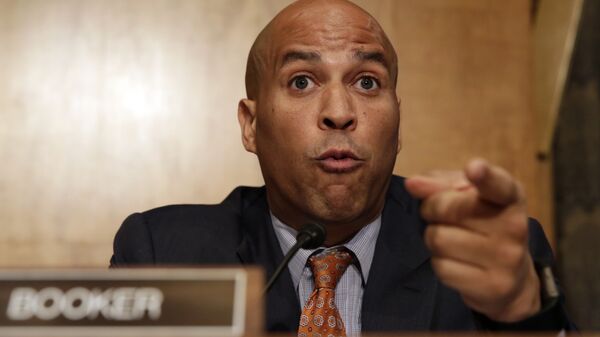 Ilya Tsukanov
All materialsWrite to the author
The news comes after Booker's campaign manager, Addisu Demissie, revealed he needed more donations to continue his race for the White House.

New Jersey Senator Cory Booker announced on Twitter on Monday morning he will no longer pursue the Democratic nomination for the 2020 presidential race, thanking his supporters for their efforts.

His withdrawal from the race comes a day before the upcoming Democratic presidential debate in Iowa.

It’s with a full heart that I share this news—I’m suspending my campaign for president.

To my team, supporters, and everyone who gave me a shot—thank you. I am so proud of what we built, and I feel nothing but faith in what we can accomplish together. pic.twitter.com/Fxvc549vlJ

​Booker, 50, had been considered as a possible presidential candidate for well over a decade, since a documentary about his campaign for the mayor's office in Newark, New Jersey landed an Oscar nomination in 2006.

Democratic candidate Marianne Williamson canceled her bid for the Democratic nomination on Friday. Booker and Williamson's departure whittles the field down from the over two dozen candidates who announced a bid for the White House in early 2019.

A recent Economist/YouGov poll showed Biden, Warren and Sanders competing for the top spot among Democratic hopefuls, with 27, 22 and 20 points each, respectively, with Buttigieg polling at 7 percent. Gabbard, Bloomberg, Yang, and Klobuchar rounded out the top tier at three points apiece. Despite their neck-and-neck polling with Klobuchar, Gabbard, Bloomberg and Yang did not qualify for Tuesday's upcoming Iowa debate, although Steyer, who is polling at 2 percent, did qualify.