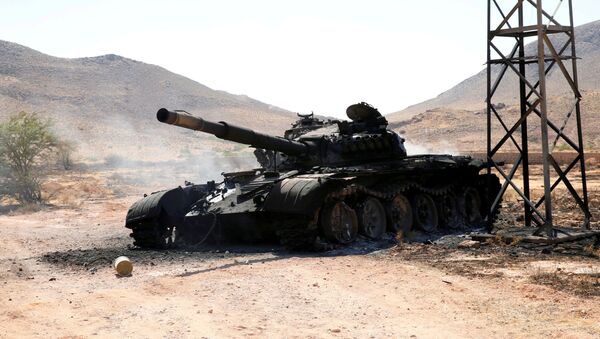 According to the Al Arabiya broadcaster, gunfire was reported in the Salah al-Din and the Ain Zara areas of the Libyan capital. There have been no reports on casualties or damage.

On Sunday, the LNA and Sarraj’s Government of National Accord (GNA) announced a ceasefire, effectively halting the months-long LNA offensive to take the GNA-held capital of Tripoli. The truce reportedly appears fragile, however, as rival sides have repeatedly accused each other of violations.

On Monday, leaders of the rival parties met in the Russian capital for negotiations mediated by Moscow and Ankara, discussing a draft ceasefire agreement. One of the primary aims of the Moscow talks was for both the LNA and GNA to ink the unconditional ceasefire accord that would come into effect at midnight on 12 January.

Haftar requested extra time before signing the ceasefire agreement with Sarraj, and eventually left the Russian capital without approving the deal, according to a source.

The draft ceasefire agreement suggested that the participants of the talks would agree to "determine a line of battle contact that ensures a sustainable ceasefire, supported by the necessary measures to be taken for stabilizing the situation on the ground and normalizing daily life in Tripoli and other cities". In addition, the sides should choose members for a "5+5 military commission" which would "determine the line of battle contact between the opposing sides, monitor the implementation of the ceasefire, ensure the sustainability of the ceasefire", according to the draft agreement.

Putin, Erdogan Discuss Situation in Libya Over Phone
Libya has been engaged in an armed conflict between two rival governments since 2011, when long-time leader Muammar Gaddafi was overthrown and killed. Libya’s east is now controlled by the LNA, while the GNA has been operating in the western part. The situation has escalated over the past few months after the LNA launched a new offensive on GNA-held Tripoli, and most recently captured the coastal city of Sirte on 6 January.

Turkish representatives at the Moscow talks voiced support for a ceasefire. Ankara signed a memorandum of understanding with the GNA on 27 November, later ratified by the Turkish parliament, stating that Turkish troops could be sent to Libya at the GNA’s request. On December 30, the GNA requested Turkish military assistance, and six days later, Erdogan told the CNN Turk broadcaster that Turkish troops were headed for Libya.

The next round of peace talks for Libya is expected to take place in Germany on 19 January. Earlier on Monday, Russian President Vladimir Putin and German Chancellor Angela Merkel discussed in phone talks preparations for the upcoming international conference in Berlin on the Libyan settlement.