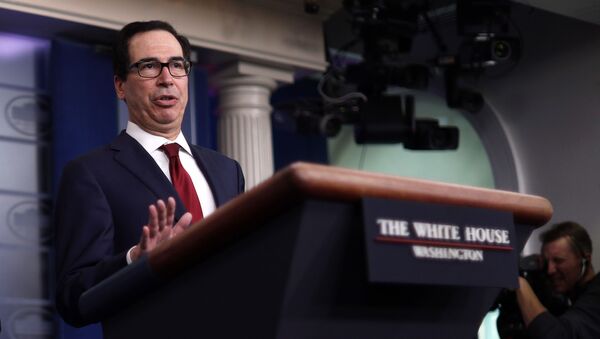 © AFP 2022 / ALEX WONG
Subscribe
In December, China and the United States declared that they had elaborated a Phase One trade deal as part of a larger bilateral trade agreement to help settle the ongoing trade dispute between the two nations.

On Sunday, US Secretary of the Treasury Steven Mnuchin said, as quoted by Reuters, that Chinese commitments in the Phase One deal were not changed during the translation process and will be released the day the agreement is signed in Washington.

“We have been going through a translation process that I think we said was really a technical issue”, he said. “And the language will be released this week. So I think it is — the day of the signing, we will be releasing the English version.”

The US treasury secretary has repeated that under the deal, China is to buy $40-50 billion worth of agricultural products of US origin annually and a total of $200 billion of US goods for the next two years, Reuters reported.

“Let me just say, it is $200 billion of additional products across the board over the next two years, and, specifically in agriculture, $40 billion to $50 billion”, Steven Mnuchin added.

On 9 January, Beijing said that China's Vice Premier Liu He is due to sign an initial 'phase one' trade deal with the US next week and he is slated to visit Washington on 13-15 January.

Late December, US President Donald Trump stated that Washington and Beijing’s phase one trade deal will be signed at the White House on 15 January.

According to the Trump administration, Phase One will cover tariff relief, increased agricultural purchases, and certain structural changes to intellectual property and technology issues.

For more than a year, the United States and China have been waging a trade war over what Trump has deemed as unfair economic conditions and alleged anti-competitive behaviour by China – a charge that Beijing denies.