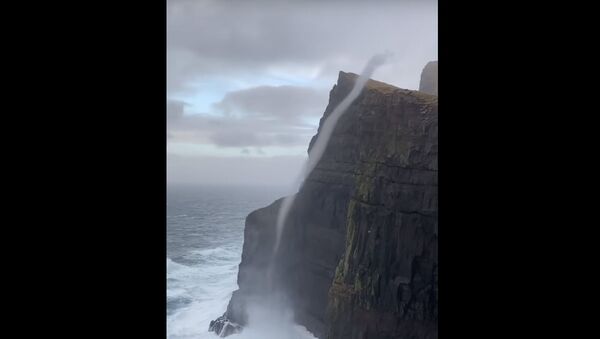 A spiral-shaped column similar to a tornado can emerge near the edge of a cliff as a result of the interaction between water sprays and the wind, although this phenomenon is not very common.

A video taken by Samy Jacobsen and published by his sister Helen Waag on YouTube shows the incredible phenomenon of water flowing up the side of a 470-metre Beinisvørð cliff while forming a rare sea vortex.

A spiral-shaped column, resembling a small tornado, was caught on camera in Suðuroy, Faroe Islands. The phenomenon is believed to be the result of the interaction of the wind and water splashes, with the edge of the cliff speeding up the rotation of the water.